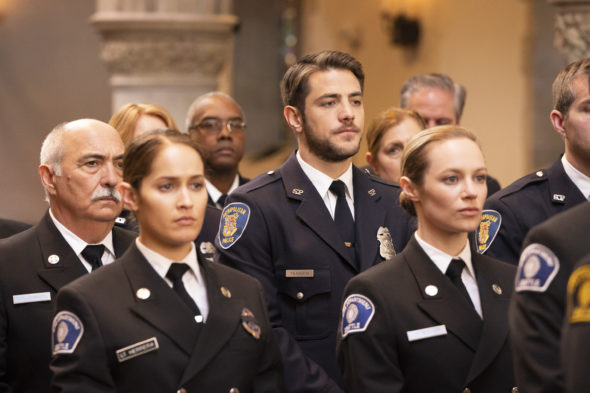 ABC’s firefighter drama, Station 19, isn’t exactly hot in the ratings but the alphabet network has renewed the series for a third season. Those episodes will begin airing as part of the 2019-20 television season, which kicks off in the fall.

An action drama from creator Stacy McKee, Station 19 is a spin-off of Shondaland’s Grey’s Anatomy. It stars Jaina Lee Ortiz, Jason George, Grey Damon, Barrett Doss, Alberto Frezza, Jay Hayden, Okieriete Onaodowan, Danielle Savre, Miguel Sandoval and Boris Kodjoe. The story centers on the crew of Seattle’s Station 19 — the best of the best. Thanks to close quarters, and the nature of the job, the team at Station 19 has grown into a family. The roots of their relationships run deep, and not all of the action they see takes place on the streets.

The second season of Station 19 is averaging a 0.97 rating in the 18-49 demographic and 5.34 million viewers. Compared to season one, that’s down by 8% in the demo and up by 1% in viewers. The series has seen a spike in the ratings when crossing over with fellow Thursday night occupant Grey’s Anatomy.

Compared to the 21 scripted ABC TV shows of the 2018-19 season, Station 19 ranks sixth in the demo and fourth in total viewers.

Today, Grey’s Anatomy was renewed for seasons 16 and 17. The network announced that executive producer and showrunner Krista Vernoff will oversee both Grey’s and Station 19.

“I’m thrilled to continue at the helm of ‘Grey’s Anatomy,’ and I’m honored and energized by the opportunity to run ‘Station 19,’ as well. To expand upon the world Stacy McKee created, and further merge it with the world of ‘Grey’s,’ is an exciting challenge,” said Krista Vernoff, executive producer
and showrunner for “Grey’s Anatomy” and “Station 19.”

“Everyone at Shondaland is thrilled that our fans’ commitment to TGIT continues,” said Shonda Rhimes and producing partner Betsy Beers in a joint statement. “We are so proud of Krista and Pete and the work they do. Making the choice to have Krista oversee ‘Station 19’ was easy — the creativity she brings to the ‘Grey’s Anatomy’ universe continues a tradition of storytelling we hold dear.”

What do you think? Do you like the Station 19 TV show? Will you be watching season three on ABC?

I thought that Station 19 was great, season 2 had me in tears several times and I thought it was much better than season one but I know that usually the first season is getting to know the characters. As soon as I saw the last episode of season two I was ready for the next season to start and I’m glad to know that at least another season will coming

Also I am ecstatic that the romance between Herera and Sullivan is finally happening!!!I really hope these two end up together.PLEASE Krista Vernoff put these two amazing characters together.It’s been a while since I last shipped a potential couple like that!!!

I am in love with this show and I can’t wait to see season3.It would be such a shame if it was cancelled but thank the universe it isnt!!!

Can’t wait for for new episodes season 3. This is a great show as are all shows with firefighters and police and emts.. in real time life these people are heroes that do this work everyday!

YYes I love that show and can tell wait until season 3
Starts!!!!

Love the show. Never have warched Greys Anatomy but like firefighter and EMS related programs such as Chicago Med Fire and PD series as well as 911.

Love the show, but sad that the Chief died. I love it when the show is crossed over with Grey’s Anatomy. Can’t wait for a season 3!

WHY WHY DID YOU KILL THE CHIEF ???? So disappointed to see that . Seems like when something goods comes about , and it’s a good thing , not a sluty thing the writers stop it ?!!?

I’d definitely watch Season 3, although Riley’s death is tragic for me and I’ll miss that character very much–almost as much as I missed “McDreamy”[Derek Shepherd] when he passed in “Grey’s Anatomy.”