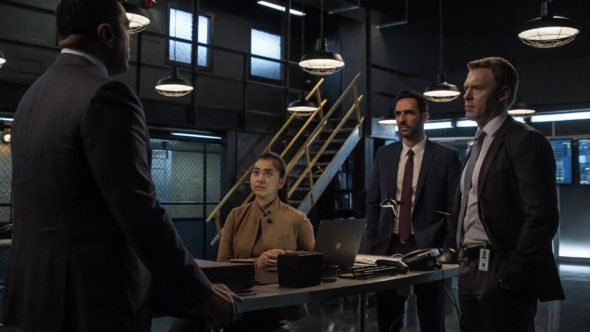 Could Red lose everything in the eighth season of The Blacklist TV show on NBC? As we all know, the Nielsen ratings typically play a big role in determining whether a TV show like The Blacklist is cancelled or renewed for season nine. Unfortunately, most of us do not live in Nielsen households. Because many viewers feel frustration when their viewing habits and opinions aren’t considered, we invite you to rate all of the eighth season episodes of The Blacklist here. *Status update below.

An NBC thriller drama series, The Blacklist stars James Spader, Megan Boone, Diego Klattenhoff, Amir Arison, Hisham Tawfiq, Laura Sohn, and Harry Lennix. The crime drama centers on one of the FBI’s most wanted fugitives, Raymond “Red” Reddington (Spader), who offers to help the authorities if a specific rookie agent, Elizabeth Keen (Boone), partners with him. In season eight, with his back against the wall, Red faces his most formidable enemy yet — Elizabeth. Aligned with her mother, infamous Russian spy Katarina Rostova, Liz must decide how far she is willing to go to find out why Reddington has entered her life and what his endgame really is. The fallout between Red and Keen will have devastating consequences for all that lie in their wake, including the Task Force they helped to create.

What do you think? Which season eight episodes of The Blacklist TV series do you rate as wonderful, terrible, or somewhere between? Do you think that The Blacklist should be cancelled or renewed for a ninth season on NBC? Don’t forget to vote, and share your thoughts, below.

*1/26/21 update: NBC has renewed The Blacklist TV series for a ninth season.

I have always felt that James Spader was a much better talent than his reviews gave him credit for! One of the finest of this age. I have always enjoyed his wit and style.

I love the show. I would like to see the show goes on for a lot more seasons. I feel the numbers will come up for the show. With all the shut downs that has happened and we are facing it again people are just getting things reset up. Hang in there, the show is great.

I love Blacklist, probably the best show on nation TV
About the only show I watch that is not cable tv
Please keep
It on
Cast are all good and story line is very interesting
And worth watching weekly

Really awesome tv show, should be continuing for season 9 as well. All the casts are fantastic but Megan&James are the best couple until now in tv show 🙂

It sure is one of the best crime shows. No idea Elizabeth Keen actress name but great every season fighting for her life see her true family matter the most love about it,

Getting better ever season has change it was good season premiere love it. It worth watching love James Spader .

I don’t remember enough French to know all that was expressed here, but I know enough that I agree! Please keep this totally awesome show going! To many of our greatest shows are being taken away to be replaced with some of the corniest, hard to follow, not worth wasting your time to watch television shows that don’t have enough realizium! We love Mr. James Spades & the rest of the crew!! When I heard he was coming to a made-for-tv show, it’s the reason I tuned in! And he’s why I have remained loyally watching for all 9 seasons!!… Read more »

Blacklist is great and should continue but within the character Elizabeth Keen.

Only thing I missed was Brian Dennehy…. Loved him in everything he did. RIP

I love this show…Keeps me guessing all the time…

Such a great need to boost ratings hopefully worth waiting 6 months ago since aired. Good start season premiere last night.

Awesome as ever. Spader at another class.

I think there should be a 9th season. I love every episode of all the seasons. Including season 8, episode 1.

Love this show!! Been waiting for it to come back on.