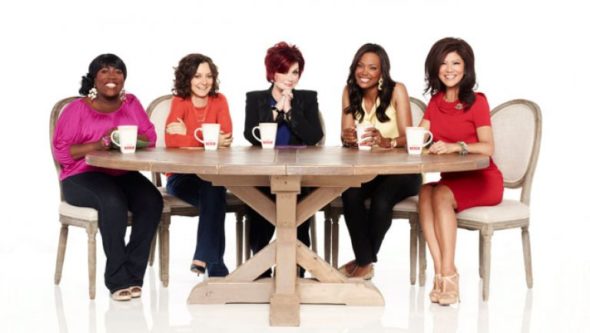 Julie Chen is sticking by her man. Deadline reports the Talk co-host is leaving the CBS TV show after nine years.

Chen has been a co-host on the daytime talk show since it debuted in 2010. Current co-hosts include Sharon Osbourne, Sara Gilbert, Eve, and Sheryl Underwood. The series premiered its ninth season on September 10th.

Chen is leaving The Talk after her husband, former CBS chief Les Moonves, was accused of sexual misconduct. She released a statement saying her priorities are with her family at this time. See Chen’s full statement below:

For eight seasons, Julie Chen has co-hosted The Talk with incredible energy, grace and professionalism. Her talents played a big role in our successful launch of CBS’ first network daytime talk show, and in the series growth into an Emmy Award-winning broadcast.

All of us here have tremendous appreciation for the dedication and passion she brought to the show every day and for her generous role as an ambassador for CBS Daytime. We are grateful for her many other contributions, respect her decision and wish Julie all the best in everything she does.”

What do you think? Do you watch The Talk? Will you continue to watch without Chen?

Julie had to leave The Talk because it is a discussion show. They discuss the MeToo movement, etc. How would she comment on that now that her husband is one of the people accused?

I wonder if she’ll leave Big Brother also. Many others would be a good host of BB, just hope it isn’t cancelled because of the Moonves mess!

Mayans would be alot better if they would talk English rather so much Spanish. Can’t watch show due to having to read all the fricking time. Will probably quit because of that.

I don’t care about The Yak, I mean The Talk. But I do care about Big Brother. But I would be surprised if that got cancelled because of her. She’s not that good of a host and the show does not hinge on her at all.

Well, that might affect whether or not “Big Brother” comes back next year on CBS!

i do not know right now, if i will continue to watch “the talk” Julie Chen was a big reason i watched it, now if she leaves big brother too, well that will answer it for me, she was a good reporter in her day and she was a great show host, But , now having a family and a child, she needs to take time for life and her family, GOOD LUCK IN THE FUTURE !! MR. AND MRS MOONVES

Cop out. Julie didn’t do anything and she should hold her head high and continue to host the Talk. Why is she runn8ng away? Because it is CBS? She doesn’t need to talk about it, just continue to do her job. Unless CBS wanted her out and she bowed out “gracefully”? I hope CBS continues the Talk but they do need to find a strong leader of the group. It sure isn’t Sharon or any of them…… I do like the show and want it to continue.