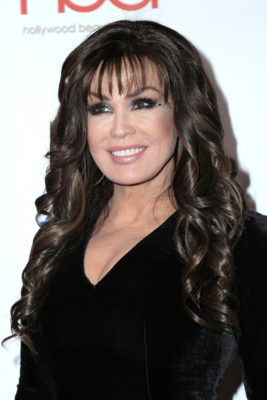 A familiar face is returning to The Talk. According to TMZ, Marie Osmond is joining the recently renewed daytime TV series as a new co-host.

Although CBS has not confirmed the news, TMZ says Osmond will replace Sara Gilbert on The Talk. Gilbert recently announced her exit, only a few months after fellow co-host Julie Chen left the daytime series.

What do you think? Do you watch The Talk? Do you think Marie Osmond is a good addition to the cast?

Please cancel season 10 of the talk I personally will not watch anymore with the new host Marie Osmond she is not worth watching, and I will not watch it anymore. A religious fanatic Mormon!!wish you would have hired carnie Wilson then I would have watched

That’s all we need: an ultra conservative religious fanatic.

Please Marie Osmond has had her own talk show more than once never did she foist religious anything views that just isn’t who she is . She is mormon and has her own beliefs and that is her right, I’m not an avid talk watcher but when I’ve watched never seen a segment where religion was talked about!

I’m so happy to watch Marie on tv again

Marie Osmond is a good fit,has a good personality and disposition,comes from a great family. I wish her and all the ladies of the talk a great new season

I like Marie but I feel she is a weak addition.

How can you say that about Marie that she is a weak addition .I have watched the Talk program from Perth,Western Australia and I have no problems with her being added to show.Give Marie a go. Jenni

Who do you think would be a better co-host?
You think maybe Julie Chen?