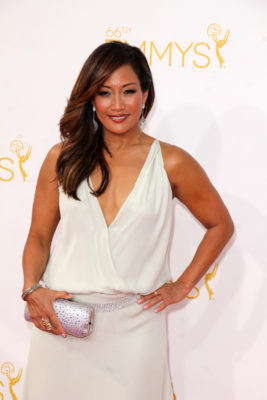 Carrie Ann Inaba is coming to CBS. Today, the network announced the Dancing with the Stars judge has joined The Talk.

Inaba has been a recurring guest on the daytime talk show for the past two seasons. The current hosts also include Eve, Sara Gilbert, Sharon Osbourne, and Sheryl Underwood.

Inaba joins The Talk a few months after co-host Julie Chen left the CBS series. You can read more info below:

THE TALK announced live today that Carrie Ann Inaba has joined as a new host of the Daytime Emmy Award-winning talk show. Inaba made her official debut today, joining Eve, Sara Gilbert, Sharon Osbourne and Sheryl Underwood. Throughout the past two seasons, Inaba has appeared as a recurring guest co-host on THE TALK.

“Everyone’s Talking about it, and I’m excited to confirm it. We’re welcoming Carrie Ann Inaba to THE TALK table,” said Angelica McDaniel, Executive Vice President, Daytime Programs, CBS Entertainment. “Carrie Ann connects with audiences by being genuine. We appreciate her warmth, heart and vulnerability, and love what she brings to the show.”

“Having the opportunity to sit at the table with Eve, Sara, Sharon and Sheryl has been such an enriching experience, and I’m honored and looking forward to joining them daily,” says Carrie Ann Inaba. “It’s the authentic conversations and connection with the audience and the ladies that really drew me to THE TALK. I feel very fortunate to be a part of this show.”

Inaba has served as a judge on ABC’s award-winning competition series “Dancing with the Stars” for all 27 seasons, since its debut in 2005. As an original judge, she has appeared in every episode to date. Later, she was featured in a spin-off series with fellow judge, Bruno Tonioli, titled “Dance Wars: Bruno vs. Carrie Ann.” Inaba began her television career in 1990 when she landed her first major role on “In Living Color,” becoming one of the first Asian Americans to perform contemporary dance on national television as one of the Fly Girls. Also, she was a featured solo dancer during Madonna’s “The Girlie Show World Tour” in 1993. The multifaceted Inaba began performing professionally at age 18 when she moved to Japan, where she released three singles as a recording artist. Behind the camera, Inaba has choreographed and staged performances for “American Idol,” “American Juniors,” “Dance Fever,” “TV Land Awards,” “Kids’ Choice Awards,” “American Music Awards” and “Miss America” pageants, which she hosted last year. Her additional hosting credits include Game Show Network’s “1 VS. 100” and TV Guide Network’s live red carpet coverage at award shows, along with “Fashion Wrap.” Inaba has been a recurring guest co-host on “Live with Kelly and Ryan,” filling in more than any other talent, with almost 30 appearances to date. Also, she appeared on the big screen in “Austin Powers in Goldmember,” “Austin Powers: The Spy Who Shagged Me,” “American Virgin” and “Monster Mash,” and as a dancer in “Boys and Girls,” “Showgirls” and “Lord of Illusions.”

CBS’ Daytime Emmy Award-winning talk show THE TALK features a panel of well-known news and entertainment personalities discussing current events, pop culture, contemporary issues, family, celebrity and the trending topics of the day. The daily one-hour series is hosted by Eve, Sara Gilbert, Carrie Ann Inaba, Sharon Osbourne and Sheryl Underwood, who swap stories, challenge each other on issues and engage the studio audience and viewers at home about events in the headlines and their own homes. Show segments include guest interviews with entertainers and newsmakers, musical performances, cooking demos with celebrity chefs, as well as real-world advice. Multiple Daytime Emmy Award winner John Redmann serves as executive producer. Gilbert, who developed the show, is also an executive producer. Heather Gray and Kristin Matthews are co-executive producers.”

What do you think? Do you watch The Talk? Are you happy about the addition of Carrie Ann Inaba?