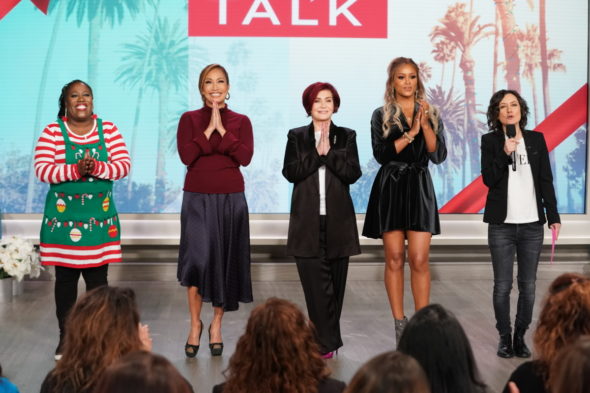 It’s official. Carrie Ann Inaba is joining The Talk TV show on CBS as a regular co-host. The Dancing with the Stars judge will (pictured above, second-from-the-left) who has been one of the substitutes filling the chair left vacant by Julie Chen Moonves’ departure, will board the series in January.

Variety reports Inaba and CBS have already finalized the deal.

What do you think? Are you a Carrie Ann Inaba fan? Do you think she’ll be a good fit on The Talk on CBS?

Yes I think she is doing great job altho i thought Marie Osmond was hired to specifically take over as main host. I kept waiting for that to happen tho I knew she needed time to I guess to get trained and broken in so to speak. But it just never happened. Now she’s leaving and I’m very disappointed but I guess I understand her reasons. That’s ok and Carrie Ana is doing great job. She’s seems very comfortable in doing it. Love all the ladies.

She annoys me and I don’t care for her

Not a fan of Carrie Ann. Annoying

Congratulations Carrie. I’m soo happy for you. You were my first choice last time they were looking for a new host. I know you’ll do a great job.

I couldn’t be happier about Carrie Ann taking over the co-host position! After Julie Chen (sadly) left and the show had a parade of substitutes including Inaba, Carrie Ann really stood out as ideal and I’ve been hoping they would offer her the position. She’s perfect: smart, knowledgeable, personable, likeable and most of all, she has great chemistry with the other ladies on The Talk. As a long time fan I’m very relieved that she was chosen. 🙂

Oh my goodness!!! I am so excited about Carrie Ann taking the job on “The Talk”!! She has the sweetest and funniest personality ever! I guarantee she will boost the viewers of the show. However, I certainly miss Julie Chen and wish her well ❤️