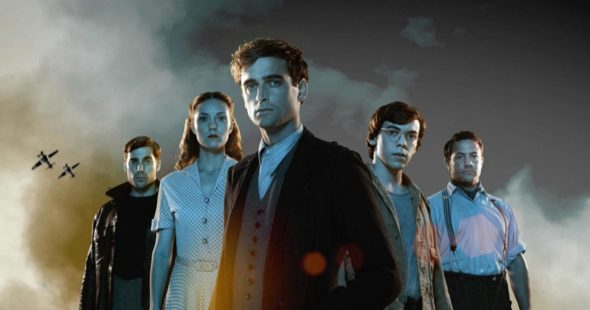 The World War II drama is inspired by the true story of a Lake Ontario espionage training compound. The series centers on five new recruits who must leave behind their lives and go to Camp X, to train as spies for the Allied Forces.

Harry James (Price) is well-versed in chemistry, explosives, Morse Code, gadgets, and weaponry. His encyclopedic knowledge in these areas make him invaluable to Special Operations. The “little brother” of the gang, Harry now finds himself parachuting into war zones, instead of hitting the books at U of T.

A cop from a working-class London family, lean, mean, fighting machine Neil MacKay (Brown) is blessed with quick reflexes and a sharp mind. With a background that involved working on anti-riot squads in Shanghai, Neil was one of the first Westerners to earn a black belt. He brings that and his weapons expertise to Camp X, along with his utter loathing of the Germans, who annihilated his family, during the Blitz.

As the daughter of a French-Canadian mother and German-Jewish father, Aurora Luft (Brochu) was once the target of bullies and soon learned how to fight back. Driven, this trilingual former journalist insists on being the best at everything. Thanks to her gift at blending in, she has the makings of an expert clandestine operative.

A former Madison Avenue sensation, Tom Cummings (Milligan) once idolized cowboys, pirates, and warriors. Now that this intuitive, natural athlete is at Camp X, he is impatient to take down the Nazis. With his advertising background, Tom has a keen understanding of human nature and is skilled in both propaganda and the art of seduction.

Rounding out the new recruits is Alfred Graves (Laskey), a hero in the making. With synesthesia that contributes to his perfect memory, Alfred has a superior talent for espionage. In wartime though, sometimes a man needs to forget things — things which Alfred can’t. His memory also leaves him uniquely vulnerable to the enemy.

Although their missions are fraught with danger, these young, gifted trainees are out to help the Allies change the world.

Series Finale:
Episode #28 — Remembrence
The team’s final mission could change the course of the war. Aurora (Évelyne Brochu) needs Faber (Torben Liebrecht)’s help to land the knockout blow… but can he be trusted?
First aired: October 29, 2018.

What do you think? Do you like the X Company TV series? Should this TV show have been cancelled or renewed for a fourth season on Ovation?

Excellent casting, screenplay, costumes. Quality from first to last. You know you have a hit when my 17 and 19 year olds would actually stay down stairs AND put their phones down. I would love to see the series renewed but I would hate to watch the quality decline or another cast member killed.

X company should be renewed

Excellent show! Great personalities show the personal conflicts endured by so many during this terrible era.

I think is should be renewed, although i’ll Miss the actors that were killed off, or was he? Sometimes the one closest to the bomb receive the least injuries. I was glued to the TV set . They did a fabulous job and deserve a renewed series (plural)….lots of plurals!

What a tease ending! After Aurora, Alfred and Neil jump out of a perfectly good airplane, Alfred is shown back at Camp X with 4 clusters on his shoulder board followed by Aurora under the Belgian flag! This led me to believe that this was to be another season…then I read about this! PUHLEEZE bring this series back…I’d GLADLY see your Stanley Cup back in your country for a renewal of this great program after over 20 consecutive seasons in ours!

Why is it that when there is a show of this high a standard , that’s the actors and the directing combined!, is left in the dust again with no remorse, just the tears of the viewers.

please renew….it’s a great show. I was so disappoint this week to find it was the final episode.

I share your disappointment. Such an interesting story line with great actors. Bring it back.

We loved this show. Hope it gets renewed . So many twists. Did a great job telling the story.