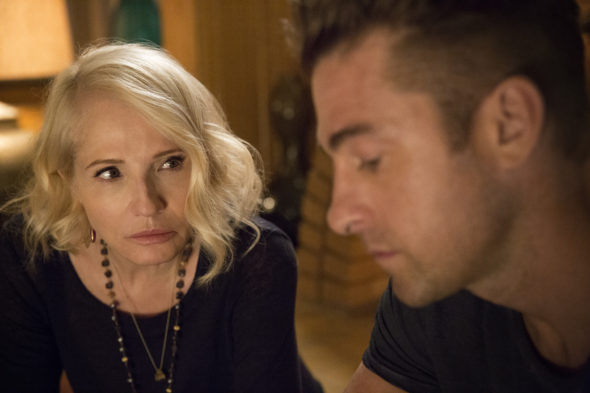 Will the Cody family cease their criminal ways? Has the Animal Kingdom TV show been cancelled or renewed for a third season on TNT? The television vulture is watching all the latest cancellation and renewal news, so this page is the place to track the status of Animal Kingdom season three. Bookmark it, or subscribe for the latest updates. Remember, the television vulture is watching your shows. Are you?

Airing on the TNT cable channel, Animal Kingdom stars Ellen Barkin, Scott Speedman, Shawn Hatosy, Ben Robson, Jake Weary, Finn Cole, and Molly Gordon. In season two, the recurring cast includes Alex Meraz, Jennifer Landon, and Tembi Locke. A television adaption of the 2010 Australian feature film, the story centers on Joshua “J” Cody (Cole). After his mom dies from a heroin overdose, J moves in with his estranged grandmother — Janine “Smurf” Cody (Barkin) — and her unruly clan of criminals. The second season opens with the Codys up to no good. When their heist fails to proceed as planned, it shakes up the family dynamics. As a threat from Smurf’s past emerges, they must decide whether to break away, or rally to her side.

The second season of Animal Kingdom averaged a 0.38 rating in the 18-49 demographic and 1.17 million viewers. Compared to season one, that’s down by 12% and down by 8%, respectively. Learn how Animal Kingdom stacks up against other TNT TV shows.

The second season debut was down slightly in comparison to its series premiere and the ratings have dipped. However, most TV shows are way down when it comes to live ratings. For this reason, I suspect that TNT will renew Animal Kingdom for a third season. Things can change though and I’ll keep a hungry eye on the ratings and update this page as needed. Subscribe for free updates on any Animal Kingdom cancellation and renewal news.

7/27/2017 UPDATE: Animal Kingdom has been renewed for a third season by TNT. Details here.

What do you think? Are you glad that the Animal Kingdom TV show has been renewed for a third season? How would you feel if TNT had cancelled this TV show, instead?

I LOVE ANIMAL KINGDOM! Please renew for a third season!!!! Best show ever!

I love Animal Kingdom!!! Everyone of the characters is an important part of this series. Please renew for another season.

Do not cx. love the show! I speak for 6 members of my family.

Please renew this show! I wait all week to watch it, love the cast and the story!!!

This show is amazing, I’m 32 years old and grandma smurf turns me on!! Lol all the boys are baaaaad ass and Cody has really evolved as a character taking on a huge role… awesome awesome season 3 here we come!!!!!!

My husband and I are huge fans of Animal Kingdom. wevhave got so many of our friends and family watching the show. It would be sad to see the seasons end. Please don’t end the show. keep it going and keep us fans happy..

Johnnie Lynn May
Reply to  Sam

I’m so ecstatic that Animal Kingdom got Season 3!!! I absolutely love this show and can’t wait to continue on watching Animal Kingdom. I hope it keeps going for several seasons. I love the Cody’s ❤️❤️❤️

I love this show and all of the characters! Please do not cancel this show!

Renew, renew, renew!! Love the show. I never watch TV but I will for Animal Kingdom!!

Ellen Barkin and cast are wonderful. I really enjoy this show. It MUST hav another season , season 3 !!!!

Love the show! If they cancel the show without wrapping up properly (which takes another season) then we will boycott the network!

Keep it; a very nice distraction that I enjoy watching.