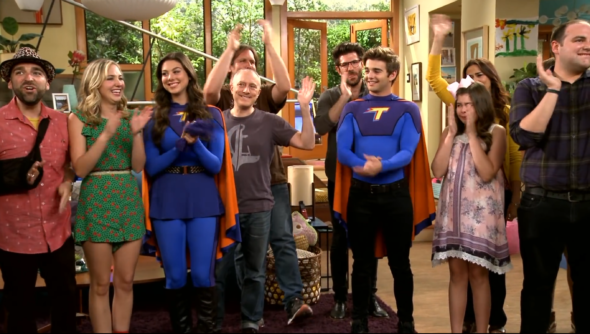 Tonight, the Thunderman family members officially turned in their tights. The Nickelodeon TV show ran for four seasons and 103 episodes. While there are plenty of episodes of The Thundermans to watch in reruns, would you like to see the superhero clan return someday for a new adventure?

Created by Jed Spingman, The Thundermans TV show revolves around a superpowered family who are trying to live a normal life in the town of Hiddenville. Retired heroes Hank and Barb do their best not to use their abilities but they aren’t very successful. While teens Phoebe and Max are twins, they (initially) have very different plans for their lives. Phoebe wants to be a superhero so she can use her powers for good but Max dreams of being the next big supervillain. Younger siblings Nora, Billy, and Chloe also plan to use their abilities for good and, eventually, Max follows suit. The show stars Kira Kosarin, Jack Griffo, Addison Riecke, Diego Velazquez, Chris Tallman, Rosa Blasi, and Maya Le Clark.

While viewers got to watch the last episodes of The Thundermans tonight (Nickelodeondecided to air several episodes in a mini-marathon), the cast and crew said goodbye to the series nearly a year ago.  On July 28, 2017, the cable channel confirmed that production had wrapped on the fourth season and that that would be the end of the series as well. Fortunately, the decision to end the series was made in advance so that the writers could bring the series to a close.

Here’s some footage of the cast and crew saying their farewells to the show.

Though The Thundermans TV show ended tonight, there’s always a chance that Nickelodeon will want to reunite the family for a new adventure at some point in the future. It seems like reboots and revivals have never been more popular. Would that be a good idea?

What do you think? Would you like to see the Thunderman family reunion at some point? Or, do you think that this is where their story should end?

Please return them I love you so much I love it so much I really would like them to come back to see if Phoebe Married link is Max Married Allison and if they have kids.

i would love to see the thundermans return please

Please bring back the Thundermans