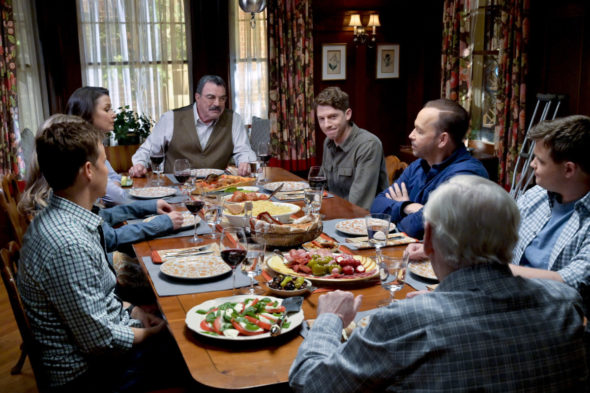 Blue Bloods has now ended its 11th season on CBS, and the season finale could have served as the end of the series. The cop family drama was renewed for a 12th season last month but, in late 2020, showrunner Kevin Wade believed the end might be near.

Wade said the following about the CBS series in an interview with Deadline:

“We were told pretty early on, I think before Thanksgiving that our season finale would be the last two episodes and would air back to back which I immediately took as they’re planning to wrap up the series … So I started to think about how do we do something that could serve as a season finale but also if need be as a series finale.

We went back to the end of the first season where all the Reagans became involved in finding out and catching and bringing to justice the bad cops who killed Joe Reagan who is of course, Joe Hill’s father. And it was kind of a callback to that, just in case it was a series finale it would have a circle to it.”

The finale was completely filmed before news of the renewal was released last month. Blue Bloods will return for season 12 in the fall.

What do you think? Are you a fan of Blue Bloods on CBS? Do you plan to watch the new season next fall? Would the episodes that aired last Friday have satisfied you as a series finale?

Great show. Good plots. Good endings, and there is always something to learn about life and relationships.

I am so glad that Blue Bloods was renewed again. It is one of the best shows that is on TV. I love all of the actors and actresses on the show especially Tom Selleck. I hope he will always be returning to the show each time they renew it.

I’m glad this show is renewed!!! Love it!

I love Blue Bloods and watched it from the first year on TV. Yes, I am soo glad it has been renewed.

I love this show! Great actors and actresses, interesting story lines. I
have watched every episode since it
started. So happy it was renewed!!!

I definitely plan to watch Blue Bloods in the Fall. I had read that the series would be renewed for the 12th season before the season finale, so I did not think of the two episodes as the closing of the series. I am looking forward to the plot line where the bad cops are found and arrested.

You’ll can’t go no where What am I suppose to do Fridays at 10. This has been my family for years

Love Blue Bloods!! Will watch as long as it’s on. Keep it going!!!

Sue A McElrath
Reply to  Rjl

Love this show. It is my favorite. In an ideal world, I would welcome 100 seasons!❤

Sue A McElrath
Reply to  Ollie

Could not be happier that we get to continue with Blue Bloods!!

Love Blue Bloods. You better not get rid of this one!

What the hell happens to Wednesday merthone of Blue Bloods. Looking forward to Blue Bloods today and no you put NCIS and another woke SVU

SVU is there worse now… Stop watching the woke garbage 4 years ago.