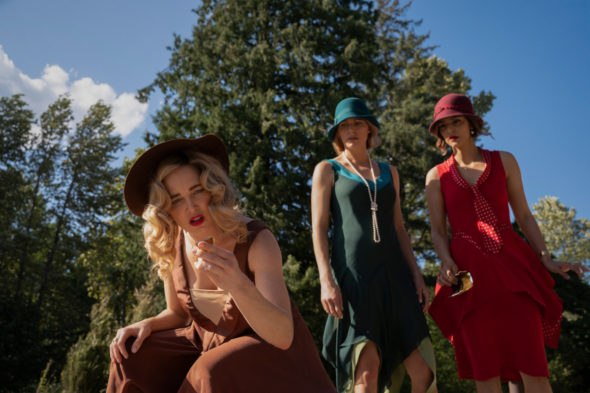 A CW superhero comedy-drama series, the DC’s Legends of Tomorrow TV show stars Caity Lotz, Nick Zano, Tala Ashe, Jes Macallan, Matt Ryan, Adam Tsekhman, Olivia Swann, Shayan Sobhian, Lisseth Chavez, and Amy Pemberton. The series follows a motley group of heroes and villains as they have misadventures across time and space in their stolen Waverider time-ship. In season seven, after saving 1925 Earth from an alien invasion (and getting married), Legends co-captains Sara Lance (Lotz) and Ava Sharpe (Macallan) think they and their crew can finally go home and relax. Unfortunately, their time travel ship gets blown up by a second Waverider, leaving the Legends trapped in 1925.

*4/29/22 update: DC’s Legends of Tomorrow has been cancelled by The CW so there won’t be an eighth season.

PLEASEEEEE KEEP MAKING DC’s LEGENDS OF TOMORROW SHOW. This show keeps me from suiciding, it has been for years now. My only hope for life…

Please we need into the Badlands season 5 because Badlands movie is like my daily meals I always must watch it before I do anything else please, please, please……….. AMC studio do for us.

What happened to this show? It used to be awesome. The last 2 seasons have been a disaster.

Legends of tomorrow is the best show.. It indicates all the aspect that gives us learnings and also happiness without biases of genders they gives a lot of inspiration.. They deserve to renewed another season

This show is tragic, it’s mono, boring, agenda driven trash… It started great, then phased off with all the romance yawn-fest, we’re bored of the romance, we want action, story, fun, the gay and bromance factors are boring, and i’m gay.. says a lot.

Still going this?
Ended with that silly blue bear theme for me.