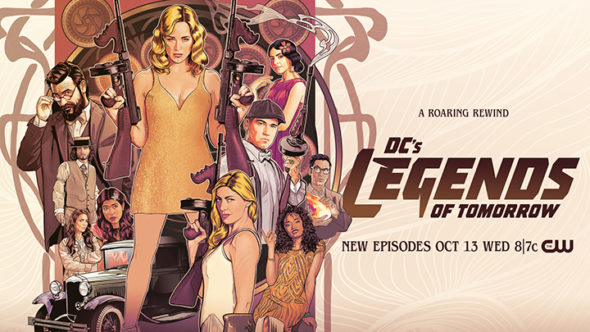 While superhero shows have done very well for The CW, most seem to have limited shelf-lives. Could this be the final year for DC’s Legends of Tomorrow or, will it be renewed for season eight? Stay tuned. *Status update below.

A superhero comedy-drama series, the DC’s Legends of Tomorrow TV show stars Caity Lotz, Nick Zano, Tala Ashe, Jes Macallan, Matt Ryan, Adam Tsekhman, Olivia Swann, Shayan Sobhian, Lisseth Chavez, and Amy Pemberton. The series follows a motley group of heroes and villains as they have misadventures across time and space in their stolen Waverider time-ship. In season seven, after saving 1925 Earth from an alien invasion (and getting married), Legends co-captains Sara Lance (Lotz) and Ava Sharpe (Macallan) think they and their crew can finally go home and relax. Unfortunately, their time travel ship gets blown up by a second Waverider, leaving the Legends trapped in 1925.

What do you think? Do you like the DC’s Legends of Tomorrow TV series on The CW? Should it be cancelled or renewed for an eighth season?

*4/29/22 update: DC’s Legends of Tomorrow has been cancelled by The CW so there won’t be an eighth season.

I would like it to renewed it a awesome show

I hope it will be renewed

Legends most definitely earned an 8th season . Should also retire Behrad and new Zari, but keep original Zari and get her out of the totem. And ship another one or two characters on vacation and give captain Lance new screw up future legends , to screw things up for the better!

Network should really advertise this show, becayse it is only good show left on CW. Too bad that 2 weeks break made it massive decline. Thwy should cancel dumpsterirre like Flash, Batwoman or Stargirl while focus more on this show.

Somehow it has much greater live on US raitings that previous season.

Is this result maybe of marketing ?

Maybe it’s true, because Warner Brothers and CW never carred to advertise this show unlike Superman Lois and Batwoman. SupermanLois advertises works, because this show is actually good, but with Batwoman they didn’t manage to appeal to audience.

I guess DC fandome managed to advertise it

Maybe but I suspect it has more to do with season six having aired during summer when TV viewership is lower. After seven seasons, anyone who likes this kind of show has likely already found it.