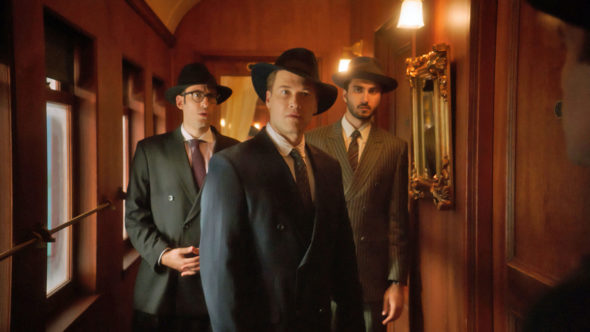 Will the Waverider be taking its final trip this year? Has the DC’s Legends of Tomorrow TV show been cancelled or renewed for an eighth season on The CW? The television vulture is watching all the latest cancellation and renewal news, so this page is the place to track the status of DC’s Legends of Tomorrow, season eight. Bookmark it, or subscribe for the latest updates. Remember, the television vulture is watching your shows. Are you?

Airing on The CW television network, the DC’s Legends of Tomorrow TV show stars Caity Lotz, Nick Zano, Tala Ashe, Jes Macallan, Matt Ryan, Adam Tsekhman, Olivia Swann, Shayan Sobhian, Lisseth Chavez, and Amy Pemberton. The series follows a motley group of heroes and villains as they have misadventures across time and space in their stolen Waverider time-ship. In season seven, after saving 1925 Earth from an alien invasion (and getting married), Legends co-captains Sara Lance (Lotz) and Ava Sharpe (Macallan) think they and their crew can finally go home and relax. Unfortunately, their time travel ship gets blown up by a second Waverider, leaving the Legends trapped in 1925.

The seventh season of DC’s Legends of Tomorrow averaged a 0.09 rating in the 18-49 demographic and 528,000 viewers. Compared to season six, that’s up by 11% in the demo and up by 27% in viewership in the live+same day ratings (including DVR playback through 3:00 AM). While these numbers don’t include further delayed or streaming viewing, they are a very good indicator of how a show is performing, especially when compared to others on the same channel. There can be other economic factors involved in a show’s fate, but typically the higher-rated series are renewed and the lower-rated ones are cancelled. Find out how DC’s Legends of Tomorrow stacks up against other CW TV shows.

4/29/22 update: DC’s Legends of Tomorrow has been cancelled by The CW so there won’t be an eighth season.

What do you think? Were you hoping that the DC’s Legends of Tomorrow TV show would be renewed for an eighth season? Are you sorry that The CW cancelled this TV series, instead?

THIS SHOW DEFINITELY NEEDS TO GET RENEWED!!!!!
I don’t give a crap about ratings, it is amazing and funny!!!!!!

There needs to be one more season, I’m sorry but to end the season with the legends getting arrested and this new guy who was brought in, leaves another cliff hanger. I want to see one more season, have the legends fully retire and find out who this guy is who tried to steal the wave ridder

feel it’s time it come’s to and end,i like all 7 season’s it’s time now fa new series to come out, them had a good run,thank’s l o t

Tired of this show. Lost its’ charm a long time ago. Cut it loose.