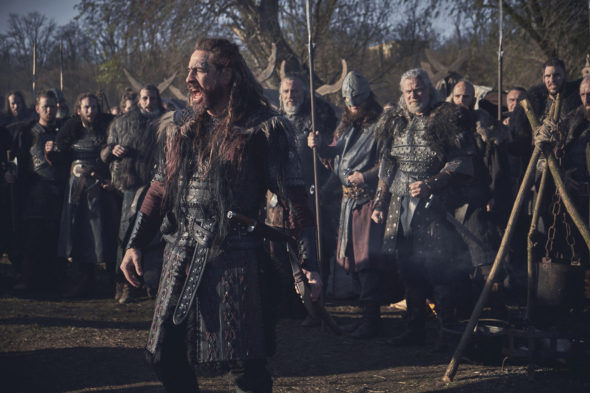 Will Alfred’s dream of a united England survive? Is The Last Kingdom TV show cancelled or renewed for a fourth season on Netflix? The television vulture is watching all the latest TV cancellation and renewal news, so this page is the place to track the status of The Last Kingdom season four. Bookmark it, or subscribe for the latest updates. Remember, the television vulture is watching your shows. Are you?

A BBC and Netflix historical drama, The Last Kingdom stars Alexander Dreymon, David Dawson, Emily Cox, Tobias Santelmann, Harry McEntire, Joseph Millson, Björn Bengtsson, and Ian Hart. An adaptation of Bernard Cornwell’s novel series, The Saxon Stories, the historical drama follows Uhtred of Bebbanburg (Dreymon), the son of a 9th Century Saxon nobleman. After killing his father, Danish invaders kidnap the boy and he is raised by their warlord, Ragnar. Years later, when Ragnar is killed, Uhtred vows to avenge him and reclaim his birthright. In season three, both King Alfred’s (Dawson) health and his dreams of a united England are fading. Meanwhile, Uhtred must take command and confront a new threat — Danish warlord Sigrid (Bengtsson).

Will BBC and Netflix cancel or renew The Last Kingdom for season four? It’s tough to say, because we only have access to Netflix TV show “ratings,” if they decide to release them. Since this series is a co-production between the UK and US companies, that further complicates things. For now, I’ll keep an eye on the trades and update this page with breaking developments. Subscribe for free Last Kingdom cancellation and renewal news alerts.

12/26/18 update: Netflix has renewed The Last Kingdom for a fourth season. Details here.

What do you think? Should The Last Kingdom TV show have been or renewed for a fourth season? How would you feel if they had cancelled this TV series instead?

Great series, hope there is a season 5.

Brilliant series. Hopw there is a season 5.

Can’t wait for the 4th season of The Last Kingdom.

As a history of the UK buff, I very much enjoy The Last Kingdom series. With only the three seasons completed the show seems very incomplete. So bring on the fourth season! The series needs it and so do I!

Please bring it back for season 4 I absolutely love it ❤️❤️❤️❤️❤️❤️❤️

I absolutely like be the show please bring it back

I’m 64, The Last Kingdom is the best show I have ever watched, very well done

Please keep this show going. I can’t wait to see season 4 I check periodically to see if there will be a release date and haven’t seen anything yet. Patiently waiting.

Please please don’t cancel. Lots of interesting characters, a great plot and not a second is boring.

Oh my gosh! My husband and I love this show. Netflix should definitely keep this show going. My husband is a big Bernard Cornwell fan.

I love The Last Kingdom, I hope Netflex continues with more episodes of this very interesting story. If they cancel this show it would be a big mistake.