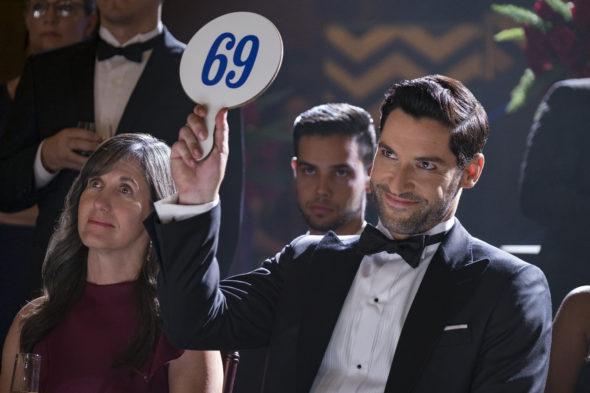 How lucky is this devil? Has the Lucifer TV show been cancelled or renewed for a fifth season on Netflix? The television vulture is watching for the latest cancellation and renewal news, so this page is the place to track the status of Lucifer, season five. Bookmark it, or subscribe for the latest updates. Remember, the television vulture is watching your shows. Are you?

Since they are not ad-supported and track their own viewer statistics, it’s a little trickier to predict whether Netflix will cancel or renew Lucifer for season five. Here are a couple of things to remember, as we wait for an announcement. When Netflix renews, it usually does so pretty quickly. A little bird told me that they generally make the decision within the first month of the release date — although the renewal announcement may come later. In the case of this show, Netflix had a solid idea of its performance on a broadcast network, before they picked it up. Flying blind, I predict a season five renewal. Since that’s just speculation, I’ll keep a hungry eye on the trades and press releases, so subscribe for free updates on any Lucifer cancellation or renewal news.

6/6/2019 update: Netflix has renewed Lucifer for a fifth and final season.

What do you think? Should the Lucifer TV series have been cancelled or renewed for season five? Is this fifth season the right time to end it?

Please do season 5 Tom is so good as Lucifer and I have totally enjoyed my last 2 seasons catchup with netflix ……missed it as Fox didn’t advertise it enough …watched seasons 1 and 2 and then poof ….gone was not happy ….until we got the last 2 on Netflix…..well done Netflix x

Please renew!Loved it so much already watched season 4.Cant wait for season 5

Yoooo, we gotta have another season or three, bois. Netflix, if you cancel this show, they’ll be hell to pay

We watched all of season 5 in 2 days … love love love the show!

You have to keep lucifer going. It is nice to he able to sit down after a long day at work and get excited about watching something on t.v. there is just something about the cast and show that draws you in. I have not missed an nb episode and when season 4 came to netflix i knew i had to get it. I am up at 4.30am every day for work an b then go home to look after the farm yet i still managed to watch at least 3 episodes per night. Lucifer is the only show i… Read more »

Please continue the show. You cant end a show this good like that atleast one more season.. to complete it…

Love this show.. I appreciate Netflix picking it up & I think Netflix has done a wonderful job continuing the series! Thank you Netflix & keep up the great work with bringing shows back, continuing series & great original programming! One dedicated subscriber!!

Of course renew. It’s a bit of fun in an otherwise troublesome world, and the chemistry is fantastic.

please keep it going.. need a few more
seasons not just one.. its not good to end a good show like this..

please keep it going.. not one season, a few more.. its a show which we get involved when the story keeps moving.. really need this show not to end..