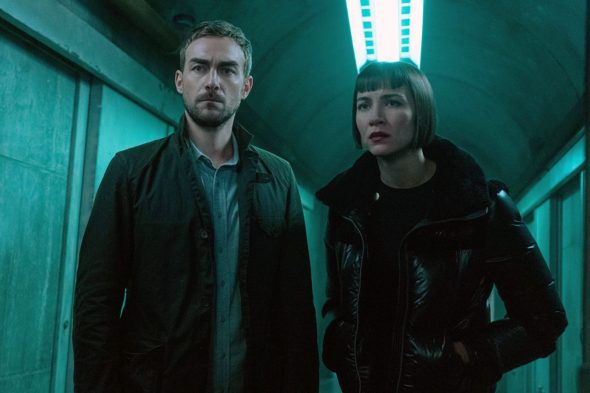 Though there’s still plenty of evil to vanquish, Daimon and Ana are out of work. Hulu has cancelled the Helstrom TV series so, there won’t be a second season of the fantasy horror series.

Based on Marvel Comics characters, the Helstrom TV show stars Tom Austen, Sydney Lemmon, Elizabeth Marvel, Robert Wisdom, Ariana Guerra, June Carryl, and Alain Uy. In the story, Daimon (Austen) and Ana Helstrom (Lemmon) are the offspring of a mysterious and powerful serial killer.  Working together, with a complicated dynamic, they track down the worst of humanity — each with their own attitude and skills.

The 10 episodes of the first (and only) season were released on October 16th.

The cancellation marks the end of live-action shows produced under Jeph Loeb’s Marvel Television unit. It was reported in December 2019 that no new series would be developed by Loeb’s group. Two animated series, M.O.D.O.K. and Hit-Monkey, are still in the works at Hulu.

Though Helstrom has ended, there are plenty of Marvel TV shows in the works at another streaming service — Disney+. Last week, on Disney Investor Day, details about 11 upcoming Marvel TV series were released.

What do you think? Did you watch the Helstrom TV show on Hulu? Are you sorry to hear that there won’t be a second season?

This is wrong! It seems like evey time that a smart, well written, intelligent show in my favorite genre is created, I watch it and find myself waiting for the second season only to find out that it has been cancelled. Either they are spending too much money to keep these shows going or I am just a really bad judge of quality entertainment.

Really enjoyed this show. Was looking forward to another season.
This show was a cut above most other tv programs.

Why? It was a good show, no “moral” story, just good story telling and fun action!!

Agree with you need more seasons but marvel owns Disney plus now making shows on there streaming service but unfortunately not return they did on purpose get cancelled which sucks hate it big bummer p,

Why?? im so sad, i liked the season and both main characters were awesome.

Very disappointed love the show, sorry bute this is stupid to not give use this show

Very disappointed. I was enjoying the show. My only consolation is that I stopped watching several episodes before the end of the season once I became suspicious this would happen.

Don’t understand contract with Disney plus for all shows no need cancelled every show on Netflix what a shame it so good on Hulu. Like to start petition and riot so stupid not fair really.

WHY IN THE WORLD WOULD YOU CANCEL THIS SHOW? THIS WAS A GREAT SHOW,LOVED IT AND WAS HOPING FOE MORE AND THEN YOU GO AND DO THIS. NOBOBY EVER GIVES A SHOW A CHANCE AND ONE SEASON IS NOT ENOUGH, I SEE THIS HAPPEN SO MANY TIMES THAT IT IS NOW OUT OF CONTROL. STOP DOING THIS, GIVES THESE SHOWS A CHANCE AND DO NOT REPLACE THIS SHOW WITH SOME SORT OF LAME COMEDY WE HAVE MORE THEN ENOUGH OF THEM NOW, WISH YOU WOULD BRING THIS SHOW BACK.!!!!!!!!

Once again cancellations after one season. Does these producers ever listen to their audiences? I’m about ready to cancel everything but the weather. At least I know that still previews without fail

Good news, it was totally a weak production, bad storyline, bad villains, it was more a possess movie than a marvel superhero show.
God I missed all Netflix Marcel shows which were dark and strong in any part.

Sigh. When will I learn that Hulu is where Disney sends Marvel shows to die?

Hulu is from Disney, right? Helstrom cancelled, instead you’ll get 8 new Star Wars related series. Mandalorian is OK, but that is because the rest is so bad. So let’s flood the Disney/Hulu streaming services with this new age Star Wars crap, instead of some (more) original series, like Helstrom. Helstrom suffered the same fate as Constatine. Another series set in supernatural realms, that was also cancelled too soon. When the main character has too many flaws to be considered the good guy….that is a sure recipe to only get 1 season, if that. A bit of bull excrement, if… Read more »

My first Hulu original series I watch ever on there what a shame love it had end with cliffhanger big bummer so good,