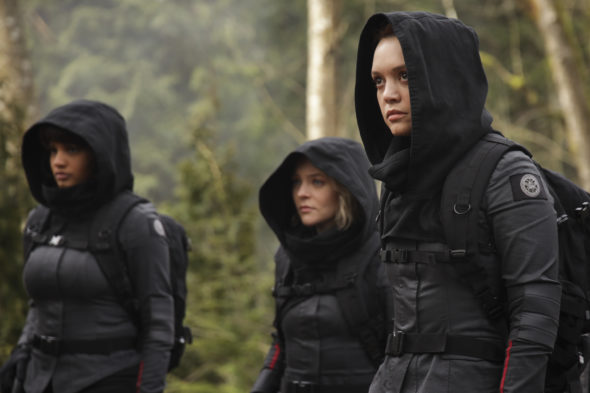 Here’s more information about the upcoming seasons from Freeform:

Freeform released its summer schedule, including a slate of highly anticipated new and returning original series.

All titles will be available to stream on Hulu the day after the premiere.

MOTHERLAND: FORT SALEM
The end of season 2 of “Motherland: Fort Salem” left Abigail, Tally, Raelle and Scylla fugitives on the run. Now without a military nor a home, they seek protection alongside the Dodger community in the Cession — but laying low and staying out of trouble has never been their strong suit. With witch hunters working against them from inside the White House, our heroes must call upon ancient forces in the final battle for their right to exist.

GOOD TROUBLE
“Good Trouble” follows the residents of downtown Los Angeles’ The Coterie as they juggle career, love and the 20-something growing pains at a time in your life where your friends are your family.

EVERYTHING’S TRASH
Written, executive produced and starring Phoebe Robinson, “Everything’s Trash” follows Phoebe, a 30-something outspoken podcast star making her professional mark while living a broke and delightfully messy life in Brooklyn. When her “perfect” older brother launches a political campaign, she’s forced to start her adulting journ-journ. Ugh. Life may be a little boo-boo, but Phoebe, ever the cocoa queen, is still thriving. The series also stars Jordan Carlos, Toccarra Cash, Nneka Okafor and Moses Storm. It is executive produced by Jonathan Groff, who also serves as showrunner. Tiny Reparations, led by Jose Acevedo, serves as nonwriting co-executive producer. Co-executive producer Chioke Nassor will direct. The series is produced by ABC Signature. “Everything’s Trash” will premiere with double episodes on Wednesday, July 13, at 10:00 p.m. and 10:30 p.m. EDT/PDT, then weekly at 10:30 p.m. EDT/PDT.

GROWN-ISH
Emmy-nominated “grown-ish,” a spinoff of the hit comedy “black-ish,” returns for its fifth season. On the heels of big sister Zoey’s graduation, Andre Johnson Jr., aka Junior (Marcus Scribner), enrolls at Cal U and embarks on his own journey to being “grown.”

About Freeform
Freeform’s distinct brand of coming-of-age programming helps to position it as the No. 1 primetime cable network in entertainment among Adults, Women and Men 18-34 in the 2021/2022 TV season to date. Connecting to audiences with its bold original programming and immersive social engagement, Freeform channels the force and momentum of its young adult audience in its quest for progress with authentic, groundbreaking original series such as Emmy®-nominated “grown-ish,” “Good Trouble,” “Motherland: Fort Salem,” “Single Drunk Female” and “Cruel Summer,” which was the No. 1 new cable drama of 2021 among Women 18-34. Last year, Freeform aired four of the Top 15 scripted cable original series among Women 18-34 — more than any other network, with “grown-ish” ranking as cable’s No. 1 live-action comedy series of the year in the demo.

What do you think? Are you looking forward to watching any of these Freeform TV series this summer?