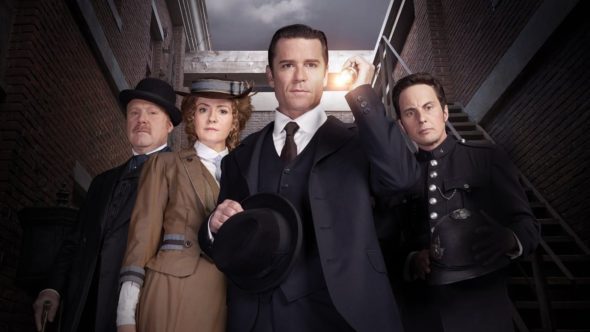 Murdoch Mysteries is not going anywhere just yet. CBC has reportedly renewed the drama series for season 15. The cast and crew began work on the new season last week, per TV Wise. In the U.S., the series airs on Ovation and streams on Acorn TV.

Peter Mitchell said the following about the CBC series and his plans for season 15:

“We address a few of the continuing stories in Episodes 1 and 2, but not all of them. When we do get back to those stories, we will learn that things have progressed. For mystery fans, there will be a legitimate mystery. And Violet is left in an interesting situation as well.”

A premiere date will be announced at later date. Season 14 wrapped airing its episodes in the United States earlier this month.

What do you think? Are you a fan of Murdoch Mysteries? Do you plan to watch the new season when it arrives?

Thank you so much for the great news! So looking forward to #15! Love this show!

Absolutely in love with the show and the characters. Have watched episodes over and over. Never want to see it end.

Loyal since day 1. Can hardly wait for season 15.

Loyal fans since day one and happy to know it will be back. However, would like to see the show less preachy and more of a detective show. Many issues we think important today just were not in the early 1900s.

BEST SHOW EVER,
WATCHED EVERY ONE LOVE ALL THE STARS
CAN NOT WAIT FOR S15

Love the show and all the story lines revolving around historical figures!

So glad Murdoch is renewed. A great show. Thank you!

I can’t wait until it comes on again! Hooray! I was getting worried

That’s very good news. Murdoch Mysteries is a very good show. It is really a great series to watch. So very happy to hear it’s been renewed!!

Have watched from beginning . I will watch to the end .

I love Murdock. It is by far the best show on Tv. I hope it keeps getting renewed. My husband and I are so excited when we get to see new episodes!!!

Watch every episode at least 3 times, love the show!