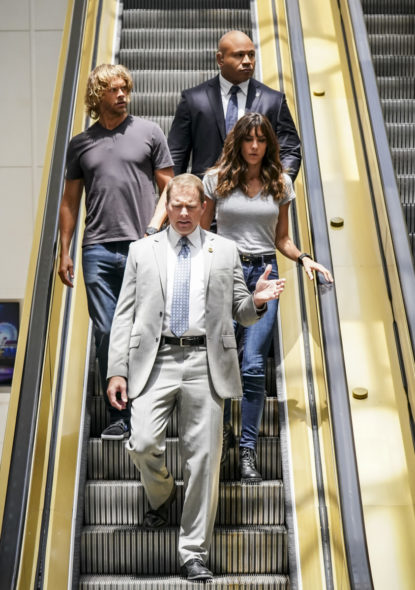 Are Callan and Hanna still at the top of their game during the 10th season of the NCIS: Los Angeles TV show on CBS? As we all know, the Nielsen ratings typically play a big role in determining whether a TV show like NCIS: Los Angeles is cancelled or renewed for season 11. Unfortunately, most of us do not live in Nielsen households. Because many viewers feel frustration when their viewing habits and opinions aren’t considered, we’d like to offer you the chance to rate all of the season 10 episodes of NCIS: Los Angeles here. *Status update below.

What do you think? Which season 10 episodes of the NCIS: Los Angeles TV series do you rate as wonderful, terrible, or somewhere between? Should CBS cancel or renew NCIS: Los Angeles for an 11th season? Don’t forget to vote, and share your thoughts, below.

I like this show even watch reruns leave it on please.

I hope this show continues for many more seasons. I really like it.

NCIS Los Angeles is one of my all time favorite shows. IU do, however wish that Heddy would come back.

I love this show. It should have at least another 5 years run. We still need to see Hetty. Is she ill in real life? Or is she retiring? I have really been concerned about her. I am sure other viewers are worried about her too.

Have always loved the dynamic characters of the show. I am now very weary of conflict between the acting directors and the team. Waste of time and great talent. More time is spent on proving teams’ competence instead of solving good v bad issues.

Love this show one of my favorite s leave it alone

I love NCIS Los Angeles. It was and still is the best off shoot from the original NCIS series. We don’t watch the original NCIS much anymore as some of the best characters have left (namely Denozo and Abby), and have never cared for NCIS New Orleans.

This is my favorite show of all. I hope it doesn’t ever get cancelled. But we need Heddy. Where is she?

I love NCIS LA I wish it was in a different spot/ not after the football game. I only saw the last half of the show on Sunday Thats not fair to us to them and the ratings.Why cant they be on the 10 PM slot EST and Madam Secretary after the game,I dont like Madam Secretary anyway,NCIS LA is an awesome show and always full of action and great acting with the cast.

Patty
Reply to  Patricia A Murray

Vida
Reply to  Patricia A Murray

I record Madam Secretary in case a football game runs late so I get the complete NCIS Los Angeles even though I don’t watch MS. I LOVE NCIS and NCIS Los Angeles and would be very sad if cancelled.

Mosely doesn’t “fit”! From the beginning her character was “down on the team”? This is our favorite TV show, the sometimes funny & sometimes dramatic relationships with the team make this show great to watch. More Hedi, less Mosely.

I agree, And you say it correct, the balance in fun and drama is the unique selling point of this show, i sometimes mist in the last season and hope will return this season.

Get rid of Mosely…. she caused all this for her own gain …. keep Gerald McRaney…. he fits in better with the crew!

Get rid of Mosely, PLEASE! Hate how Hodoko was discarded.

Wow, that was an epic episode. NCIS LA is back.

Should have beeen the final episode last season. Absurd, unrealistic to ask viewers to accept the miraculous recovery of top 4 Stars! Give viewers credit due, we are not an ignorant fan base.