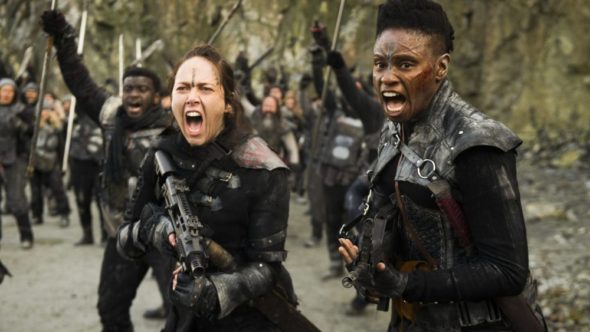 Are you a fan of The 100? According to The Wrap, The CW will air a prequel series pilot during the TV show’s seventh and final season.

A dystopian drama, The 100 centers on a post-apocalyptic group of survivors, who believe their people are all that is left of mankind. When they return to Earth, they realize they aren’t the only ones. The cast includes Eliza Taylor, Paige Turco, Marie Avgeropoulos, Bob Morley, Henry Ian Cusick, Lindsey Morgan, Richard Harmon, Tasya Teles, and Shannon Kook.

From The 100 creator Jason Rothenberg, the prequel series pilot is set 97 years before the The CW show and is “set to begin with the nuclear apocalypse that wiped out most of the human population on Earth and follows a band of survivors on the ground ‘as they learn to cope in a dangerous world while fighting to create a new and better society from the ashes of what came before.'”

What do you think? Do you watch The 100? Would you watch a prequel series?

If its a good show I will watch it.

I’ll try it. If it’s good, I’ll watch, otherwise I won’t.
Isn’t that the way we all should approach content?
This, “I won’t even if it’s good” bull pisses me off.
You are basing your opinions on nothing, judging
content you have no possible knowledge of cuz
of barmy reasoning.

I would have been more interested to see what happens AFTER they find the humans that survived the apocalypse on earth as in the finale last season. Make a show maybe 25 years into the future with a different cast and name and follow the future of the human race. Like somebody else said, going back puts a lot of restrictions on the story. And yes, I also would have liked them to just leave it as it is and see how it progresses with the humans they found! There was a LOT they could have done with that story.… Read more »

It’s a really great series. I am going to be sorry to see it go.

Really wish the 100 wasn’t going to be cancelled, good show!

Never been a fan of prequels because they have to work backwards. They know how it must end and have to force the characters and story in that direction no matter what. That is much more difficult to write which is why prequels usually are not as good or completely unrelated to the original accept for a few “oh this will be that group in the old show” moments.

Nope it will ruin the main show. And would be canceled soon.

Like the 100, but no fan of prequels in general (thinking star wars). So, no I probably wont watch a prequel series.