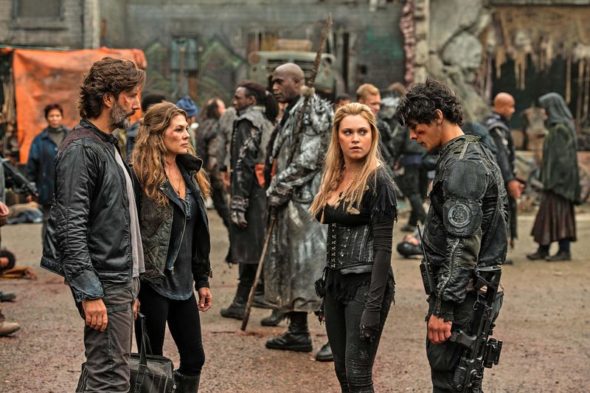 The sci-fi series centers on a post-apocalyptic group of survivors who believe their people are all that is left of mankind. When they return to Earth, they realize they aren’t the only ones. The cast includes Eliza Taylor, Paige Turco, Bob Morley, Marie Avgeropoulos, Lindsey Morgan, Christopher Larkin, Henry Ian Cusick, and Tasya Teles.

Speaking at this year’s winter TCA press conference, Pedowitz revealed The 100 showrunner Jason Rothenberg has pitched an idea for season seven but any renewal decisions won’t be made until May:

[Jason Rothenberg] does have a really good idea for his seventh season,” he said of a potential renewal for The 100. “We’ll see where we’re at, that’s a May thing.”

What do you think? Do you watch The 100? Do you want a seventh season?

This show has truly come into its own since it got off the teeny-bopper nonsense and became a real show with adults and not a bunch of goofy children running around being stupid, naive, and overly-emotional!

Yes, yes and YES!!! Make Season 7 happen, and then another and another and….. after that :). We are awaiting Season 6 to come on Netflix.

Yes! Anxiously awaiting – I had no idea that yet another good show might be on the chopping block.

Again another show that is great & dark & possible only to be put on the shelf! Who makes these decisions? The network, the producers, the stats, or just “ok we have them hooked now let’s just cancel it, haha!” Scifi is the best thing on tv! Every great show has been taken off for some stupid dance show or jungle show, with nut cases running around naked! When will you people learn after all these years that eventually Scifi lives on & on! Think Star Trek, for one! I don’t think that I’m alone in this fight! I guess… Read more »

I love “The 100”.it’s a great show! they keep it interesting,which is a good thing.hope it gets to 10 seasons.we shall see.everyone on the show does a great job! keep up the good work!

I started watching this at my son’s. I liked it so much that I purchased The 100 on Netflix just to watch this show. I was disappointed to find out that there would not be no more seasons and episodes. When I am finished with this amazing show, I am canceling Netflix. I only purchased Netflix because The 100 was on there. Deeply saddened.