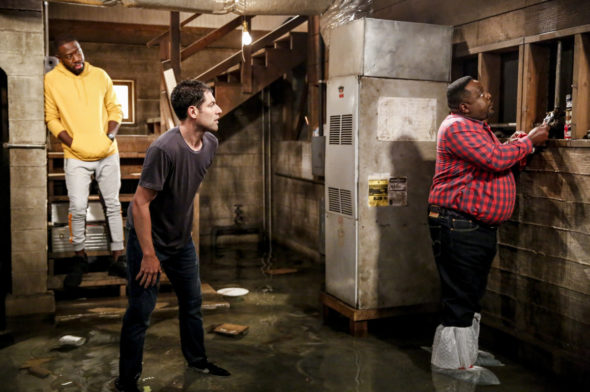 Are the Johnsons staying put or moving out? Is The Neighborhood TV show cancelled or renewed for a second season on CBS? The television vulture is watching all the latest TV cancellation and renewal news, so this page is the place to track the status of The Neighborhood, season two. Bookmark it, or subscribe for the latest updates. Remember, the television vulture is watching your shows. Are you?

A CBS sitcom, The Neighborhood stars Cedric the Entertainer, Max Greenfield, Sheaun McKinney, Marcel Spears, Hank Greenspan, Tichina Arnold, and Beth Behrs. The comedy centers on professional conflict negotiator Dave Johnson (Greenfield), who moves with his family to the Los Angeles area, after his wife, Gemma (Behrs), land a job as a school principal. The Johnsons’ new next-door neighbor, Calvin Butler (Cedric the Entertainer) is generally suspicious of outsiders and worries Dave will mess up the predominantly black community’s dynamics. Fortunately, Calvin’s wife, Tina (Arnold) is far more gracious. She and their sons do their best to make the new family feel at home.

Will CBS cancel or renew The Neighborhood for season two? The ratings haven’t been very good so, I think the series could end up being cancelled. I’ll keep an eye on the Nielsens and update this page with breaking developments. Subscribe for free The Neighborhood cancellation or renewal alerts.

What do you think? Do you like The Neighborhood TV series on CBS? Should it have been cancelled instead of renewed for a second season?

I’m glad The Neighborhood was renewed. I like this show. It’s lighthearted and Cedric is funny. When will it return to TV?

Our family loves this show. It’s the best family show on TV right now. Suitable for children. About time.

Hoping for a renew

Love all the characters. Always makes me laugh. Please renew!

I absolutely love this show, please please please, do not cancel it. It is such a refreshing show to curl up to. Just find the right time slot and I’m sure it will payoff.

Love this show. So nice to have a great comedy without nastiness. Please don’t cancel this show it’s great!

I LOVE THIS SHOW…DON’T CANCEL IT..WHAT’S WRONG WITH YOU LOL SAYS THE BLACK WOMAN THAT REALLY LOVE THIS SHOW….PLZ ..WE REALLY NEED THESE TYPES OF SHOWS….. #TEAMNEIGHBORHOODSHOW

I thought this show was a disgusting display of racism towards both white and black. The time for Archie Bunker racist humor is over. Lets agree to stop pointing out the negative differences and focus on the positive.

Please watch Adam Ruins Everything (Adam Ruins Sitcoms S3 E2)). I wasn’t not offended by the racial overtones of the show per se, but I was not entertained by the sent-up stereotypes either. The acting is surprisingly “wooden” as I feel that they are not selling the jokes. I blame the writers and producers. The jokes are the same ones from the All In The Family/Good Times/et al era that should have been left there. I truly adore T’China and have seen Cedric live more than once. I would like to be believe that we past this type of comedy,… Read more »

One of the funniest shows my boyfriend and I have watched in a long time! Please renew it!!! We binge watched it due to our work schedule so maybe people can’t watch it on it’s scheduled night like us. Again please renew this show!!!!!!

I heard a few things about this show and well I plan to see it one day. I heard it’s about a white man moving into an all black man area. and the one guy think that everything the white guy says is always meant to be racist so it is relatable. They do take affance to everything and make it about race no one dening that. I hope it get renewed

I lasted 15 seconds. The first time I hear a laugh track audience laughing at something that’s not even remotely funny, I’m out.

I loved it! Haven’t laughed this much in a long time.

I thought it was very funny . Always a Cedric fan.