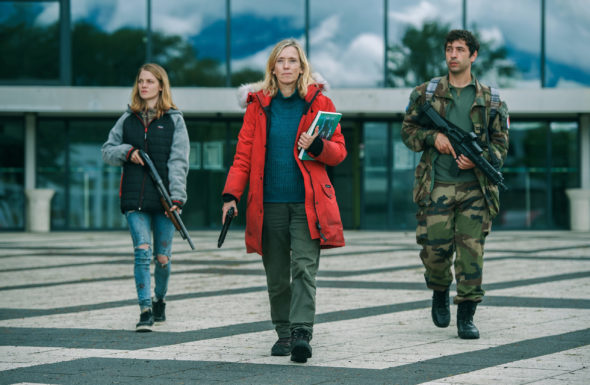 The battle for survival will wage on. The War of the Worlds TV series has been renewed for a third season and EPIX will air it in the United States. Production is underway and the new season will launch in 2022. Season two is currently airing on Sunday nights and is expecting to finish on August 1st.

The War of the Worlds TV show stars Gabriel Byrne, Daisy Edgar-Jones, Léa Drucker, Natasha Little, Stéphane Caillard, Adel Bencherif, Ty Tennant, Stephen Campbell Moore, Bayo Gbadamosi, Aaron Heffernan and Emilie de Preissac. The story takes place in present-day Europe and begins as astronomers detect a transmission from another galaxy. This serves as definitive proof of intelligent extraterrestrial life. Within days, mankind is all but wiped out by a devastating attack and pockets of humanity are left in an eerily deserted world. Season two sees the characters left reeling by the possibility that the invaders could be human. A tense fight to take back the planet awaits them. For some, the sheer desperation to survive will lead them to contemplate sacrificing one of their own.

Here’s the announcement about season three from EPIX:

New York, NY – July 6, 2021 – Premium network EPIX announced today that season three of the blockbuster series War of the Worlds has begun production and will premiere on the channel next year. Written and created by BAFTA Award-winner Howard Overman (Misfits, Crazyhead, Merlin) and based on H.G. Wells’ classic novel of the same name, the third season sees the return of Golden Globe winner and EMMY and Tony award nominated actor Gabriel Byrne (In Treatment).

Set-in present-day France and the UK, War of the Worlds season three picks up as the war between the survivors and aliens reaches a new turning point and a terrifying phenomenon grips countless people across the globe. With stakes at an all-time high, one survivor sets out to investigate, forming a tentative partnership with another unlikely hero along the way. The pair will need to use every resource they have available to face an opposition more dangerous than ever in their fight, once again, for the survival of all humanity.

Distributed internationally by STUDIOCANAL, War of the Worlds is executive produced by Julian Murphy and Johnny Capps for Urban Myth Films in partnership with CANAL+ and The Walt Disney Company. The third season is directed by Indra Siera and Jonas Alexander Arnby.

About STUDIOCANAL
STUDIOCANAL, a 100% affiliate of CANAL+ Group held by Vivendi, is Europe’s leader in production, distribution and international sales of feature films and TV series, operating directly in all three major European markets – France, the United Kingdom and Germany – as well as in Australia and New Zealand.

STUDIOCANAL owns one of the most important film libraries in the world, boasting nearly, 6,000 titles from 60 countries. Spanning 100 years of film history, this vast and unique catalogue includes among others the iconic Terminator 2, Rambo, Breathless, Mulholland Drive, The Pianist, The Graduate, The Third Man, and Belle de jour.

STUDIOCANAL produces more than 200 hours of TV series each year distributing productions and CANAL+ Creation Originale worldwide with 1,000 hours of current and library content in distribution.

Check out our status sheets to track new TV series pickups, renewals, and cancellations. You can find lists of cancelled shows here.
What do you think? Have you watched the War of the Worlds TV series on EPIX? Are you glad that the sci-fi show has been renewed for a third season?

I just watch the last episode of Season 2.
Very happy to hear there will be a Season 3
I wanna know what happens to Bill Ward.

I binged watching seasons 1 and 2 on CBC app.. well acted and movie quality…French spoken and sub titles a nice touch. So happy there’s a season 3 coming.

Looking forward to a their season. Bring it on. There’s a need for distractions with the pandemic and other world woes. Take our minds off to sci-fi land!

Watched s1 praying that they didn’t cancel s2… then after binge watching s2 I’m now so happy that there is now a s3…. thank you

Really enjoyed season 1 and 2 of this. But I still don’t know why they keep sayings it’s based on HG Wells novel. Apart from having the name War of the Worlds… that’s the only resemblance! HG wells had alien invaders in huge walking machines, tripods and they were not time travellers. So yeh, nothing like the HG Wells novel. It actually more closely resembles ‘The Time machine’.. another HG Wells book. 🙂

So excited for new season mostly because I love the atmosphere and characters. Not sure where it will go now though

I would have much prefered if he went back in time and killed Sacha, same effect I’m sure, but Sacha is a ^%$@^!!

I just binge watched Season 1 and 2 of War of the Worlds over the last 2 days. I’m thrilled there will be a Season 3. I guessed there might be another season when the show ended with that sound that signals that the “aliens” are near.

Such a great show. Love the slow burn. Really, one of my favorites in quite a while. Thank you to STUDIOCANAL and EPIX for bringing another season to us!!

Loved the series, but hard to believe there could be a third season unless someone goes back in time before Bill kills Emily. However, that’s the beauty of time travel. And that mongoloid has to go.

Love the show and have been hooked on it since season 1, episode 1. The characters are all great, well… not Sacha. Glad to see Season 3 is coming! The show is interesting, good drama and I look forward to watching.

My favourite TV show at the moment and even better the story features two languages. I like the characters and believe in them. At the end of series two, the story had reset. This is the chance to change things. They will have go further into the past to save the world, than where they are currently. This is not the end of Emily, but I do hope it’s the end of the psychopath Sacha.