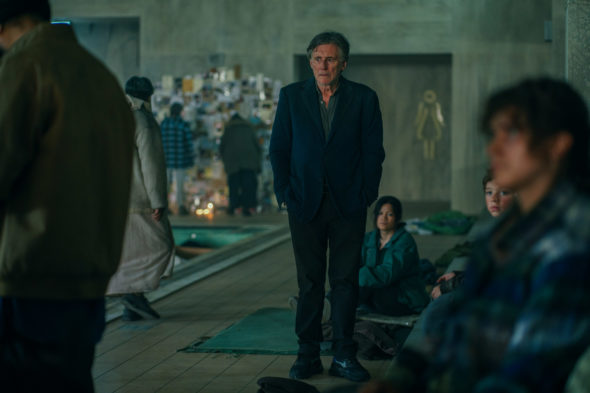 Can mankind survive? Has the War of the Worlds TV show been cancelled or renewed for a third season on EPIX? The television vulture is watching all the latest cancellation and renewal news, so this page is the place to track the status of War of the Worlds, season three. Bookmark it, or subscribe for the latest updates. Remember, the television vulture is watching your shows. Are you?

Airing on the EPIX cable channel, the War of the Worlds TV show stars Gabriel Byrne, Daisy Edgar-Jones, Léa Drucker, Natasha Little, Stéphane Caillard, Adel Bencherif, Ty Tennant, Stephen Campbell Moore, Bayo Gbadamosi, Aaron Heffernan, and Emilie de Preissac. The story takes place in present-day Europe and begins as astronomers detect a transmission from another galaxy. This serves as definitive proof of intelligent extraterrestrial life. Within days, mankind is all but wiped out by a devastating attack and pockets of humanity are left in an eerily deserted world. Season two sees the characters left reeling by the possibility that the invaders could be human. A tense fight to take back the planet awaits them. For some, the sheer desperation to survive will lead them to contemplate sacrificing one of their own.

Will War of the Worlds be cancelled or renewed for season three? The series is produced internationally so it doesn’t cost the cable channel as much as an original production would. I sense that, if a third season is produced, EPIX will sign on. I’ll keep my ears open and an eye out for news and update this page with breaking developments. Subscribe for free alerts on War of the Worlds cancellation or renewal news.

7/7/21 update: War of the Worlds has been renewed for a third season.

What do you think? Are you glad that the War of the Worlds TV show has been renewed for a third season? How would you feel if this TV series had been cancelled instead?

Very slow and ponderous. Seemed pretty tied up at end of season 2….why carry on and ruin it?

I think season 2 ended with a good somewhat happy ending. Leave it as is. Why mess up a good thing

It was already renewed by the fox group and canal+ back in February for a 3rd season. Do a search on Google for the article. It’s not hard. Jeez

We in Argentina really like this Tv serie! It’s an intelligent story and it’s much better than the english serie produced by the BBC with the same title, who ocurr in the last years of the 19º century.

I live in France so I already saw all the episodes of the second season. It’s a good show with well-written characters and good scenes but considering what happen in season 2, I don’t think there will be another season.