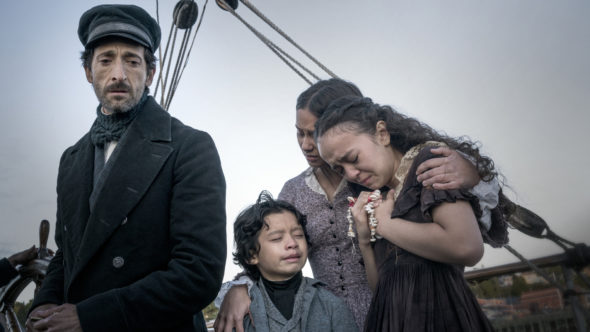 How deep are the Boone family secrets? Has the Chapelwaite TV show been cancelled or renewed for a second season on EPIX? The television vulture is watching all the latest cancellation and renewal news, so this page is the place to track the status of Chapelwaite, season two. Bookmark it, or subscribe for the latest updates. Remember, the television vulture is watching your shows. Are you?

Airing on the EPIX cable channel, the Chapelwaite TV show is based on the short story Jerusalem’s Lot by Stephen King and stars Adrien Brody and Emily Hampshire with Jennifer Ens, Sirena Gulamgaus, Ian Ho, and Eric Peterson. Set in the 1850s, the series follows Captain Charles Boone (Brody), the father of three children — Honor (Ens), Loa (Gulamgaus), and Tane (Ho). After his wife dies at sea, Boone relocates his family to his ancestral home in the small, seemingly sleepy town of Preacher’s Corners, Maine. It’s not long before Boone has to confront the secrets of his family’s sordid history. An ambitious young writer, Rebecca Morgan (Hampshire) sees her writer’s block lift when the Boone family arrives in town. Despite her mother’s protests, Rebecca applies to be the governess of the infamous Chapelwaite manor and the Boone family in order to write about them. In doing so, Rebecca will not only craft the next great gothic novel, she’ll unravel a mystery that has plagued her own family for years.

Will EPIX cancel or renew Chapelwaite for season two? Since it’s based on a short story, it would seem that this show would last for just one season. However, the cable channel hasn’t made any indication that this is a mini-series so I’m thinking that it’s likely to be renewed. I’ll update this page with breaking developments. Subscribe for free alerts on Chapelwaite cancellation or renewal news.

What do you think? Do you hope that the Chapelwaite TV show will be renewed for a second season on EPIX?