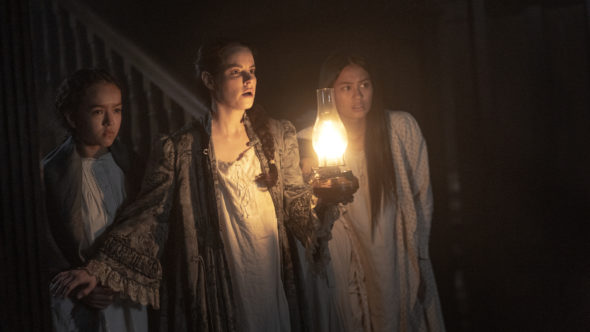 How much will be revealed in the first season of the Chapelwaite TV show on EPIX? As we all know, the Nielsen ratings typically play a big role in determining whether a TV show like Chapelwaite is cancelled or renewed for season two. Unfortunately, most of us do not live in Nielsen households. Because many viewers feel frustrated when their viewing habits and opinions aren’t considered, we invite you to rate all of the first season episodes of Chapelwaite here.  *Status Update Below.

An EPIX horror series, the Chapelwaite TV show is based on the short story Jerusalem’s Lot by Stephen King. It stars Adrien Brody and Emily Hampshire with Jennifer Ens, Sirena Gulamgaus, Ian Ho, and Eric Peterson. Set in the 1850s, the series follows Captain Charles Boone (Brody), the father of three children — Honor (Ens), Loa (Gulamgaus), and Tane (Ho). After his wife dies at sea, Boone relocates his family to his ancestral home in the small, seemingly sleepy town of Preacher’s Corners, Maine. It’s not long before Boone has to confront the secrets of his family’s sordid history. An ambitious young writer, Rebecca Morgan (Hampshire) sees her writer’s block lift when the Boone family arrives in town. Despite her mother’s protests, Rebecca applies to be the governess of the infamous Chapelwaite manor and the Boone family in order to write about them. In doing so, Rebecca will not only craft the next great gothic novel, she’ll unravel a mystery that has plagued her own family for years.

What do you think? Which season one episodes of the Chapelwaite TV series do you rate as wonderful, terrible, or somewhere between? Do you think that Chapelwaite should be cancelled or renewed for a second season on EPIX? Don’t forget to vote, and share your thoughts, below.

*2/14/22 update: Chapelwaite has been renewed for a second season.

There will be a second season, but I wonder where the story will take place. With Charles on adventure or Chapelwaite (it’s the name of the show after all). I definitley want more Emily Hampshire as Rebecca!

I really loved chapelwaite. I believe further explanation of Charles
And Loa would lead to a second season

I agree! I would love to see loa and Charles actually stay together as a team. She needs him now more then ever as a baby vamp. And he us wise and I imagine that will take him far as a vampire in all the right ways. Because loa is still so angry yet chose her family she again is in desperate need of her vampire father. Jessica , Tane and honour even her love interest should all still together and we should get to see them also! But more Charles and loas new adventures as the book keepers. And… Read more »

I really enjoyed Chapelwaite. Hope it’s a season 2. Only thing I felt cheated with Charles going off to sea! Wanted more development with Charles and Rebecca and what about Lona!

I think we will see Charles more then anyone! I hope anyway

I really enjoyed chapelWaite. The first season was amazing. Hope they come out with season two fast. I could watch this over and over! Hurry up with season two please!!!

I want to see at least one more season of Chapelwaite if not more.Best horror show to come along in years.

How can l be the only one to comment? This series is the best and most brilliant l’ve ever seen! You’ll find yourself within the maze of madness. I thought worms were only good for fishing!