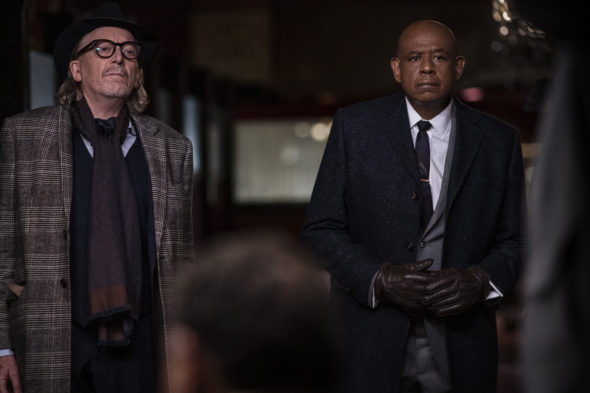 An EPIX crime drama, the Godfather of Harlem TV show stars Forest Whitaker, Vincent D’Onofrio, Ilfenesh Hadera, Nigél Thatch, Giancarlo Esposito, Lucy Fry, Rafi Gavron, Antoinette Crowe-Legacy, Erik LaRay Harvey, and Demi Singleton. The series is inspired by the story of infamous crime boss Bumpy Johnson (Whitaker) who returned from 10 years in prison to find the neighborhood he once ruled in shambles. With the streets controlled by the Italian mob, Johnson must take on the Genovese crime family to regain control. Season two finds Johnson battling the New York Crime Families for control of the lucrative and murderous “French Connection” heroin pipeline in an ambitious plan. This pits him against not only the Italians and the law but also friends and family.

What do you think? Which season two episodes of the Godfather of Harlem TV series do you rate as wonderful, terrible, or somewhere between? Do you think that Godfather of Harlem on EPIX should be cancelled or renewed for a third season? Don’t forget to vote, and share your thoughts, below.

*1/15/22 update: Godfather of Harlem has been renewed for a third season on EPIX.

I LOVE THE SHOW KNOWING EVERYTHING IS NOT TRUE BUT IT HAS GREAT WRITING, AND FANTASTIC ACTING. IT DOES NOT MAKE THE AFRICAN-AMERICAN COMMUNITY LOOK LIKE A BUNCH OF IDIOTS. THANK YOU, PROF. SMALL FOR BEING A CONSULTANT/HISTORIAN ON THIS PROGRAM

Godfather of Harlem is the best series on tv

Hello,
To the creators of Godfather of Harlem: I have throughly enjoyed this show season 1&2. I don’t feel that this is no where near over, there’s too many unanswered question to leave it this way. This can carry over to a 3rd, 4th and even a 5th season. I go way back to Hoodlum when Dutch Schultz was killed, I’m ALL in! Love it

Love love it very interesting show , especially when they are real

The godfather Harlem is a great show, depicting the times of the 1960s and what went on in our neighborhoods. Its a great show to continue to produce and I hope that it will not be canceled. There’s many people that watch this TV show that are not being represented in these comments. I know that I speak for many and I’m looking forward to the third season and can’t wait to see what happens.

This is my favorite TV show. Forrest Whitaker is an outstanding actor. I was happy to discover that he was casted to join the show. I look forward to watching it on Sundays. I felt totally disappointed when season 2 temporarily ended until August 2021. What a bummer.

This show is fantastic it is Thoroughly entertaining and by Part historical. The acting is superb. I am hooked on Godfather of Harlem. I hope they will find a way to continue the series past three or more seasons. I rate this show 5 stars

I love this show! At first as a fan of this story of how a Black man could run the dope business like Bill Gates is fascinating Not to mention seeing Denzel in American Gangster he kinda ended the roll after seeing his version of this story. Let’s not forget as well Lawrence Fishburn did a great version in “Hootlum” for the Buppy Jonhson fame. I said all of this to say… Forest Whitaker has taken the character to a whole new place! Very unexpected plot twists and I love the way they capture this era with the cars and… Read more »

Godfather of Harlem is IT