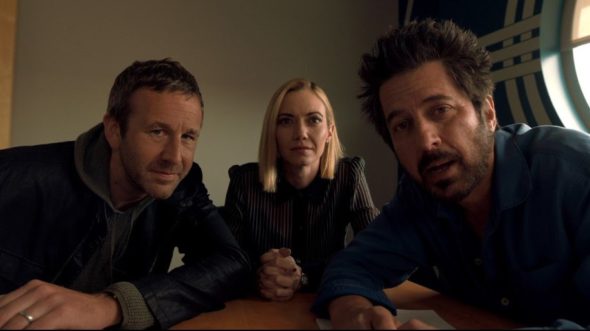 Can Miles stay out of trouble in the third season of EPIX’s Get Shorty TV show? As we all know, the Nielsen ratings typically play a big role in determining whether a TV show like Get Shorty is cancelled or renewed for season four. EPIX is a unique kind of channel though and isn’t part of the ratings system. Because many viewers feel frustration when their viewing habits and opinions aren’t considered, we invite you to rate all of the third season episodes of Get Shorty here.

An EPIX dark comedy series, Get Shorty stars Chris O’Dowd and Ray Romano with Sean Bridgers, Lidia Porto, Carolyn Dodd, Goya Robles, Megan Stevenson, Steven Weber, and Sarah Stiles. Loosely based on the Elmore Leonard novel, this TV show follows Miles Daly (O’Dowd) the muscle for a Nevada crime ring. He tries to become a movie producer in Hollywood with the help of a washed-up producer, Rick Moreweather (Romano), as a means to leave his criminal past behind. In season three, Miles embraces more ruthless methods as he settles scores and attempts to climb the Hollywood ladder.

What do you think? Which season three episodes of the Get Shorty TV series do you rate as wonderful, terrible, or somewhere between? Do you think that Get Shorty on EPIX should be cancelled or renewed for a fourth season? Don’t forget to vote, and share your thoughts, below.

Enjoyed S03 very much but it was a shame that it was a condenses season. Reminds me of the Treme screwup.

I think that Get Shorty has to continue. I want Miles to move into producing, and move past his past. I would like his co-stars to see how being tough and ruthless has benefitted him and they use similar means to help their careers. I want Amara gone, for good.

Please no! Amara must not go! That’s what makes the show so fascinating to watch!

Incredibly good cast and acting. Great story, and the whole thing is original and acerbic and poignant, using the world of gangsters and Hollywood gangsterism as a backdrop to people with lives and dreams is really engaging. And frankly, Chris O’Dowd, I mean, yeah.

I love “Get Shorty” Hope it continues.

We LOVE this show. Needs at least two more seasons to wrap the story!!!

Don’t cancel get shorty. I love it. Watched 2 times and will watch again until you finish season 3. LOVE LOVE LOVE CHRIS!!!

Was the episode 7 of season 3 the season finale? Was it canceled? It just stopped all at once!

I love this show. Please do season four. I watched it two times in a row.