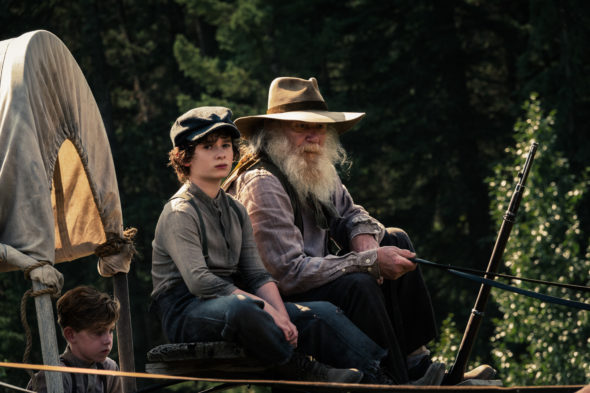 How much of this outlaw’s early life will we see unfold in the first season of the Billy the Kid TV show on EPIX? As we all know, Nielsen ratings typically play a big role in determining whether a TV show like Billy the Kid is cancelled or renewed for season two. EPIX, however, isn’t part of that system. If you’ve been watching this TV series, we’d love to know how you feel about the first season episodes of Billy the Kid here. *Status Update Below.

An EPIX Western drama series, the Billy the Kid TV show stars Tom Blyth and Daniel Webber with Eileen O’Higgins, Dakota Daulby, Sean Owen Roberts, Jonah Collier, Ryan Kennedy, Leif Nystrom, Siobhan Williams, Brendan Fletcher, Jamie Beamish, Shaun Benson, Lisa Chandler, Chad Rook, Luke Camilleri, Zak Santiago, Vincent Walsh, and Nuria Vega in recurring roles. The story is based on the life of Billy the Kid (Blyth), an American outlaw also known as William H. Bonney. It follows his life from his humble Irish roots, to his early days as a cowboy and gunslinger on the American frontier, to his pivotal role in the Lincoln County War and beyond. Jesse Evans (Webber) is another famous outlaw and leader of the Seven Rivers Gang. When they meet, Jesse has already embraced a life of crime, from robbing stores to cattle rustling. Billy is attracted to this wild and reckless character and Jesse becomes Billy’s doppelganger of sorts — his shadow self, forever inviting him over to the dark side of life.

What do you think? Which season one episodes of the Billy the Kid TV series do you rate as wonderful, terrible, or somewhere between? Do you think that Billy the Kid on EPIX should be cancelled or renewed for a second season? Don’t forget to vote, and share your thoughts, below.

Billy the Kid is an absolute winner for series of the year in my opinion. The realistic look into the life of arguably the greatest name in gunslinger history is truly epic! I hope to see a season 2 as I am sure that everyone else would like to see as well!

Keep up the work Epix! This is truly a piece of American history that needs to be told to its conclusion and thank you.

Kudos to Epix.
Billy the Kid is the best drama series on all of television right now. The story and the acting keep you coming back for more.
Can’t get enough. We need more quality programing like this.
Keep your eyes on Tom Blyth. His star is rising fast.
Epix needs to bring this series back for many seasons if it wants to remain a viable player in the television industry.
Billy the Kid is a winner for Epix
for sure.

I subscribed to Epix just to watch Billy the Kid. As a child growing up in west Texas in the 60’s & then later moving to Dallas I was always fascinated with the stories of the Wild West and especially w Billy the Kid. We went to the Billy the Kid museum & his grave multiple times on our annual trips to Santa Fe & Taos. Please continue this series. The show is very well done and the storyline is on track.

This is the best series out there and gives the audience a real look at how the west was, rich stay rich and poor stay poor or dead.

Please, Please, bring back Billy the Kid! We loved it! It is something new and fresh and the life of Billy the Kid is significant! It is an excellent storyline about his life and time in the old west. I think if you advertised it enough people will be interested especially since 1883 is over and Yellowstone may be ending soon. Because of Billy the Kid, I joined Epix. If Billy comes back, I will come back to Epix!

The only reason we subscribe to Epix was because of Billy the Kid series. If they don’t renew this show, we won’t stay.

Can’t get enough of Billy the Kid Series

This is excellent in all ways. sets, direction, character development, and all the actors are fabulous… all great. season two… let’s ride

I love the “Billy the Kid” show. I think it needs to be advertised more. I love history. I love going back in time. The characters are perfect. It is a good, wholesome t.v show and I have watched it about 3 times already.

I love Billy the Kid !Tom Blyth is killing it!best tv series ever!!!!

Lordy, Billy The Kid is one awesome series, I sure in the heck hope it get’s renewed, please we need another season of Billy The Kid, I just finished the first season so now waiting for the 2nd one to air. The actors are great!!!!!!!!!!!!!!!!!! And got some really nice horses on this series as well.

Fantastic series
Had no idea about the story
The acting was supberb
I will be very unhappy if you don’t proceed with the second season!

Don’t cancel!!!! It’s really good and Tom Blyth as Billy the Kid does an outstanding job he brings
his character to life. Great job! Where is the Season 1 finally..been waiting of it.