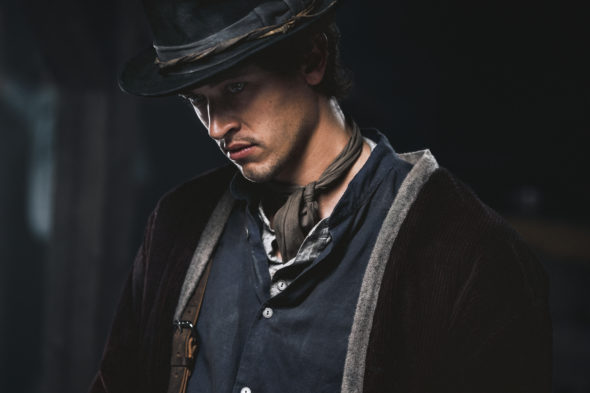 The story is based on the life of Billy the Kid (Blyth), an American outlaw also known as William H. Bonney. It follows his life from his humble Irish roots, to his early days as a cowboy and gunslinger in the American frontier, to his pivotal role in the Lincoln County War and beyond.

Jesse Evans (Webber) is another famous outlaw and the leader of the Seven Rivers Gang. When they meet, Jesse has already embraced a life of crime, from robbing stores to cattle rustling. Billy is attracted to this wild and reckless character and Jesse becomes Billy’s doppelganger of sorts — his shadow self, forever inviting him over to the dark side of life.

What do you think? Do you like the Billy the Kid TV show? Do you think it should be cancelled or renewed for another season?

Hi There is lots to tell about Billy Bonney as Pat Garret did not kill him. He lived on. Was a good friend of Chism’s your story follows the book William H Bonnie Narrative as he told it through his friends and descendants. We owned the Fox Ranch in Lincoln County near Corona New Mexico. I grew up there during the summers hearing Mexican workers tales passed down, aunts and uncles, and my Grandparenrs. Keep it going. He went back to New York , Ireland, fell in love returned to the limo next county met turnstile and the war, Santa… Read more »

I would like to believe that he escaped death as Brushy Bill. Have you heard any other factual recounting other than what has been alleged?

The days they were born do not match Billy the Kid is gone.