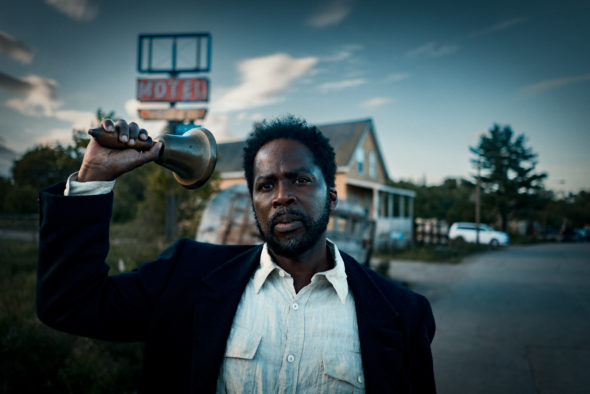 TV show description:
A sci-fi horror series, the From TV show was created by John Griffin.

The story revolves around a nightmarish town in middle America that traps all those who enter. As the unwilling residents fight to keep a sense of normalcy and search for a way out, they must also survive the threats of the surrounding forest which included terrifying creatures that come out when the sun goes down.

Sheriff Boyd Stevens (Perrineau) has instituted strong rules in the town to maintain order and keep residents safe as he searches for a way out. His deputy is Kenny (He), a first-generation immigrant who’s trapped in this town with his parents. His father is suffering from dementia.

Jim and Tabitha Matthews (Bailey and Moreno) find themselves trapped in the town after a car crash. Together, they must find a way to keep their children — Julie (Cheramy) and Ethan (Webster) — safe as they desperately search for a way back home.

Kristi (Van Landschoot) was trapped in the town during her third year of med school and has assumed the role of town medic. Father Khatri (Majumder) is strong and compassionate and he cares for the spirits of the townspeople but, there’s more to him than first meets the eye.

Fatima (Ghafoori) is an Iranian immigrant who focuses on the good, like the fact that she never would have met the love of her life if not for this terrible place.

A wildcard among the town’s residents, Sara (Konrad) may have a fractured mind or, perhaps she’s closer to the secrets of the community than anyone else.

What do you think? Do you like the From TV show? Do you think it should be cancelled or renewed for another season?

I think they should continue the series it is a good tv show and also intriguing to watch I would like to see what happens with the little boy and the old man quest also what will happen to the sheriff that left to go on a quest in the woods with the girl who cause all the issues from the beginning it is one of the best shows me and my wife has watch together in a while and we want to see more.!!!!!!!

I love the series From , I’m fact I am disappointed it was so short only 10 shows. I love it , bring it back on again please. I want to see season 2 already. Over 100 of my good friends and family loved it too. We need to see more. It’s very interested gives us a twist of scary not ever seen like this before . Awesome show !! You never know what to expect on this series that’s what made it so great! Not knowing what to expect. A lot of flicks you can figure out what’s going… Read more »

I love the show FROM , I hope they give it another season. Was episode 10 really the finale?? I want to see more asap. I am honestly so disappointed if that was the finale..

Wow…I just don’t know what to say!? This show has had me on my seat with so many WTF’s! Just waiting every Sunday for a new one. It’s been hard to get into most shows lately, but this one has been a twist of GOODNESS! Now, we wait for a new season…finale episode??? Anxiously waiting for more!!

My husband and I both love it! Please another season!

This show was amazing! I couldn’t stop watching! Had to watch some episodes twice to not miss clues. Now I am left jonesing for a new season!

Love From, should definetly be renewed

I have ADHD watching a movie or a series is difficult. I WAS HOOKED ON “FROM” FROM THE 1ST TIME I SAW THE TRAILER….Oh my GOODNESSSSSSSZZZ..

I THINK THE FOREST MAY BE SLOWLY CLOSING IN ON THEM.

I THINK THE TOWN PEOPLE WILL FORMULATE A PLAN

I WOULD LOVE TO SEE AN ENTIRE SERIED WHERE WE LEARN HOW EACH PERSON GOT THERE AND THEIR LIFE BEFORE THE TOWN. MAYBE SHOW FAMILY SEARCHING FOR THEM