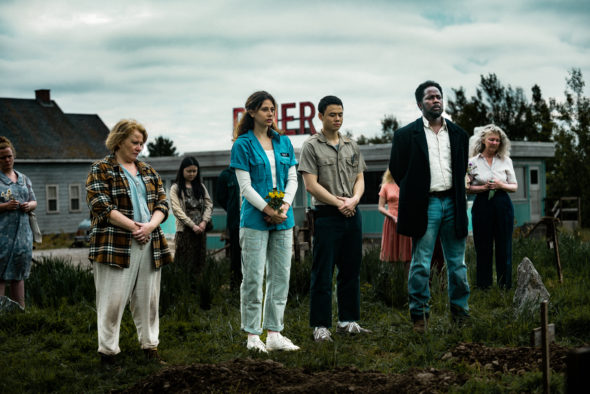 What’s really going on in this town? Has the From TV show been cancelled or renewed for a second season on EPIX? The television vulture is watching all the latest cancellation and renewal news, so this page is the place to track the status of From, season two. Bookmark it, or subscribe for the latest updates. Remember, the television vulture is watching your shows. Are you?

Airing on the EPIX subscription service, the From TV show stars Harold Perrineau, Catalina Sandino Moreno, Eion Bailey, Hannah Cheramy, Simon Webster, Ricky He, Chloe Van Landschoot, Shaun Majumder, Corteon Moore, Pegah Ghafoori, David Alpay, Elizabeth Saunders, Elizabeth Moy, and Avery Konrad. The story revolves around a nightmarish town in middle America that traps all those who enter. As the unwilling residents fight to keep a sense of normalcy and search for a way out, they must also survive the threats of the surrounding forest which included terrifying creatures that come out when the sun goes down. Sheriff Boyd Stevens (Perrineau) has instituted strong rules in the town to maintain order and to keep residents safe. Jim and Tabitha Matthews (Bailey and Moreno) find themselves trapped in the town after a car crash. Together, they must find a way to keep their children — Julie (Cheramy) and Ethan (Webster) — safe as they desperately search for a way back home.

Unless they decide to publicize viewership, it is difficult to predict whether EPIX will cancel or renew From for season two. Since EPIX isn’t ad-supported, it can take a chance on series it believes in and stories that need telling, but sooner or later it comes down to production costs, versus subscriber interest. I suspect that as long as the story doesn’t wrap up with the first season, From will be renewed for a second year. I’ll keep my ears open and an eye out for news, and will update this page with breaking developments. Subscribe for free alerts on From cancellation or renewal news.

Status Update: From has been renewed for a second season on EPIX.

What do you think?Are you glad that the From TV show has been renewed for a second season? How would you feel if EPIX had cancelled this TV series, instead?

I can’t wait to watch more

LOVE, LOVE, LOVE This show! So excited for season 2! Literally would’ve cried had they not renewed.

I like the show! It may not be Yellowstone but it’s close! I look forward to the next episode and hope there is another season.

Can’t wait for the next season

l love this series From

I don’t want to wait to watch next season! This show is so addicting,lol. Can’t wait to find out who is behind the experiment!

Yes,,I am enjoying this show