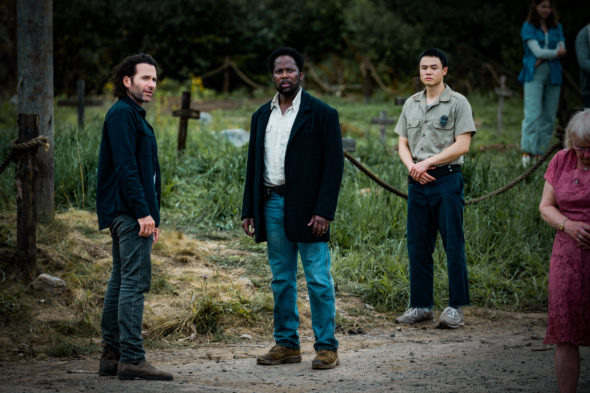 Some small-town residents are going to keep trying to escape. EPIX has renewed the From series for a second season. The first season concludes tonight on the channel and season two will launch sometime next year.

A sci-fi horror series, the From TV show stars Harold Perrineau, Catalina Sandino Moreno, Eion Bailey, Hannah Cheramy, Simon Webster, Ricky He, Chloe Van Landschoot, Shaun Majumder, Corteon Moore, Pegah Ghafoori, David Alpay, Elizabeth Saunders, Elizabeth Moy, and Avery Konrad. The story revolves around a nightmarish town in middle America that traps all those who enter. As the unwilling residents fight to keep a sense of normalcy and search for a way out, they must also survive the threats of the surrounding forest which included terrifying creatures that come out when the sun goes down. Sheriff Boyd Stevens (Perrineau) has instituted strong rules in the town to maintain order and to keep residents safe. Jim and Tabitha Matthews (Bailey and Moreno) find themselves trapped in the town after a car crash. Together, they must find a way to keep their children — Julie (Cheramy) and Ethan (Webster) — safe as they desperately search for a way back home.

Beverly Hills, CA – April 24, 2022 – Premium network EPIX® announced today that the contemporary sci-fi horror series FROM has been renewed for a 10-episode second season. Created by John Griffin (Crater) and produced by Jack Bender (Lost, Game of Thrones) and Jeff Pinkner (Lost, Alias, Fringe), the series unravels the mystery of a nightmarish town that traps all those who enter. In season two, hidden truths about the nature and terrifying origins of the town begin to emerge, even as life for its residents is plunged into chaos by the arrival of mysterious newcomers. Production will commence this summer in Halifax, Nova Scotia, with an expected air date in 2023.

The series premiere of FROM was EPIX’s most viewed original series premiere in the history of the premium network and current performance analytics track that the entire series is on pace to be EPIX’s second most-watched original behind Emmy winning series Godfather of Harlem, executive produced by and starring Forest Whitaker.

“The first season of FROM mystified, enthralled, and terrified fans and critics alike with its haunting world, vivid characters and thrilling scares,” said Michael Wright, president of EPIX. “We have been delighted by the social conversation generated by the FROM community and can’t wait to unravel more of this mysterious story with our passionate fans in season two.”

“On behalf of the producers, writers, our insanely talented cast and crew, we are thrilled and grateful to both EPIX and our audience for the opportunity to continue exploring the world of FROM,” said Jeff Pinkner, executive producer.

About Midnight Radio
Midnight Radio is the producing team of Josh Appelbaum, André Namec, Jeff Pinkner & Scott Rosenberg. On the TV side they are responsible for shows such as HIGH FIDELITY for Hulu, COWBOY BEBOP for Netflix, and ZOO for CBS. On the film side, Jeff Pinkner & Scott Rosenberg co-wrote both JUMANJI and JUMANJI 2: THE NEXT LEVEL for Sony, as well as VENOM for Sony starring Tom Hardy. Josh Appelbaum & André Nemec wrote MISSION IMPOSSIBLE: GHOST PROTOCOL for Paramount, and produced TOM CLANCY’S WITHOUT REMORSE starring Michael B. Jordan for Amazon.

About MGM
Metro Goldwyn Mayer (MGM) is a leading entertainment company focused on the production and global distribution of film and television content across all platforms. The company owns one of the world’s deepest libraries of premium film and television content as well as the premium pay television network EPIX, which is available throughout the U.S. via cable, satellite, telco and digital distributors. In addition, MGM has investments in numerous other television channels, digital platforms and interactive ventures and is producing premium short-form content for distribution. For more information, visit www.mgm.com.

About EPIX
EPIX, an MGM company, is a premium television network delivering a broad line-up of quality original series and documentaries, the latest movie releases and classic film franchises – all available on TV, on-demand, online and across devices. EPIX® has tripled the amount of original programming on the network and has become a destination for original premium content with series including  Godfather of Harlem,  starring and executive produced by Forest Whitaker; Pennyworth, the origin story of Batman’s butler Alfred and drama  Chapelwaite,  based on the short story  Jerusalem’s Lot  by Stephen King and starring Academy Award winner Adrien Brody; as well as upcoming premieres of western adventure series Billy the Kid and season two of dramedy Bridge and Tunnel  written and directed by Ed Burns. Other originals include Emmy®-nominated music docuseries Laurel Canyon; sci-fi horror series FROM produced by Midnight Radio and AGBO; docuseries Fall River, from Blumhouse Television; War of the Worlds, from Howard Overman and starring Gabriel Byrne and Daisy Edgar-Jones; sweeping historical drama Domina; acclaimed spy thriller Condor; epic fantasy drama series Britannia; docuseries NFL: The Grind and NFL Icons, from NFL Films; music docuseries Mr. A & Mr. M: The Story of A&M Records; docuseries Fiasco, based on the podcast of the same name; Belgravia, from Julian Fellowes, Gareth Neame and the creative team from Downton Abbey; docuseries Helter Skelter: An American Myth, executive produced and directed by Lesley Chilcott; By Whatever Means Necessary: The Times of Godfather of Harlem; and Enslaved featuring Hollywood icon and human rights activist Samuel L. Jackson. Launched in October 2009, EPIX® is available nationwide through cable, telco, satellite and emerging digital distribution platforms as well as through its EPIX NOW app, providing more movies than any other network with thousands of titles available for streaming.

What do you think? Have you watched the From TV show on EPIX? Are you glad that this series has been renewed for a second season?

I love the movie From and I’m very excited to know there will be a second season!

Bravo bravo thanks this is a real surprise show me and my wife found it and love it ,really had no advertisements and showed up we love it and we watch epix for a few shows pennyworth. Condor, war of the world’s. Britannia and others. Condor and godfather of Harlem are great this show From is a true horror story and I will it had 22 episodes, the wait till 2023 is to long But Bravo for epix they are producing winners. But please shorten the time between seasons I am not getting younger here please

Absolutely thrilled and excited for Season 2. Why such a long turnaround time between season’s? Let’s keep this story going strong, it’s one of the best in a long time. Looking at the dates of comments, we all possibly just finished watching the last episode and are clearly hooked. Thank you for renewing the show!

Thrilled Epix is renewing From. Can’t wait for the story to continue.

Very excited and thrilled From will have a season 2 we are loving the scary and mysterious town.

Please don’t cancell From… I’m loving it, the suspense is addictive

Get in!! Easily the best show this year so far. Can’t wait for season 2

YESSSS!! This is easily one of the best shows I’ve seen in a very long time. I’m so excited to see what’s to come and also to see if my theory is right ☺️

i loved From, it was one of the best new series i’ve seen in a long while. kudos to Epix for standing by the show.

I’m so happy that they are making another season of From. Just like another commenter mentioned it is kind of like Lost sadly I always tell people “I got lost in Lost” I have no idea how it ended, I bailed pretty early. From on the other hand has pulled me in and I’m hooked.

Yes I’m loving From it has pulled me in and I can’t wait for more thrills and scares!!

I couldn’t get into Lost either, but I love From! Can’t wait for Season 2!

First of all, I like this series a lot. But you could make a valid argument that is is ‘Lost’ again, but in a different location. And a lot more gore.

So, I hope dearly that ‘From” doesn’t go the way ‘Lost’ did. But when we see an ice bear, we’ll know enough….