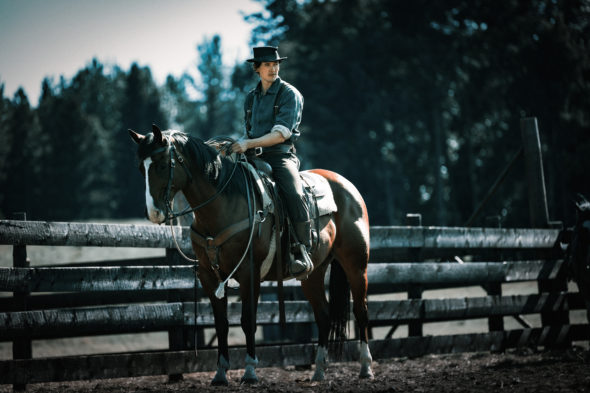 Is this outlaw just misunderstood? Has the Billy the Kid TV show been cancelled or renewed for a second season on EPIX? The television vulture is watching all the latest cancellation and renewal news, so this page is the place to track the status of Billy the Kid, season two. Bookmark it, or subscribe for the latest updates. Remember, the television vulture is watching your shows. Are you?

Airing on the EPIX cable channel, the Billy the Kid TV show stars Tom Blyth and Daniel Webber with Eileen O’Higgins, Dakota Daulby, Sean Owen Roberts, Jonah Collier, Ryan Kennedy, Leif Nystrom, Siobhan Williams, Brendan Fletcher, Jamie Beamish, Shaun Benson, Lisa Chandler, Chad Rook, Luke Camilleri, Zak Santiago, Vincent Walsh, and Nuria Vega in recurring roles. The story is based on the life of Billy the Kid (Blyth), an American outlaw also known as William H. Bonney. It follows his life from his humble Irish roots, to his early days as a cowboy and gunslinger on the American frontier, to his pivotal role in the Lincoln County War and beyond. Jesse Evans (Webber) is another famous outlaw and leader of the Seven Rivers Gang. When they meet, Jesse has already embraced a life of crime, from robbing stores to cattle rustling. Billy is attracted to this wild and reckless character and Jesse becomes Billy’s doppelganger of sorts — his shadow self, forever inviting him over to the dark side of life.

Unless they decide to publicize viewership, it is difficult to predict whether EPIX will cancel or renew Billy the Kid for season two. Since EPIX isn’t ad-supported, it can take a chance on series it believes in and stories that need telling, but sooner or later it comes down to production costs, versus viewership numbers. My sense is that the cable channel is committed to this show so I think that it will get a second season. I’ll keep my ears open and an eye out for news, and will update this page with breaking developments. Subscribe for free alerts on Billy the Kid cancellation or renewal news.

What do you think? Are you glad the Billy the Kid TV show has been renewed for a second season? How would you feel if MGM+ had cancelled this TV series, instead?

Great show, disappointed with all the ‘F’ words used in the last couple of episodes. A movie can be good without the language.

Can’t wait watched this from the day I saw it was coming!

I must admit that we’ve stumbled on a sleeping giant here.With the acting and actors really raising the bar compared to most mini series performances , you will be seeing more of this series and its characters in the future. This my friends is a perfect example of why we spend time watching a new mini series in hopes that it will turn out to be a “Billy the kid”like this one.

Please do the 2nd season, hate it when they leave a cliff hanger.
Love the story of billy the kid and his regulators, so stat a second season please

Please continue on with Billy the Kid’s story. It’s a great show

Please bring back Billy the kid for another season. It’s one of the few great shows on TV.

Yes, I enjoyed Billy the Kid and would love for it to return.

Yes please continue this series, My opinion this could be a top 5 show, And the acting is excellent

Please make a season 2, with the brushy bill Robert’s ending.

Yes every one of the eight episodes was full of excellent acting by all involved. I was upset with the unfinished story so really want to see an ending. Great story I really got into it. Very believable.

Yes I want to see this series continue

I thought it was a fantastic series, it was a binge watch for sure

this is a really great series – great story plot and great acting. please make a 3nd season of Nilly the Kid