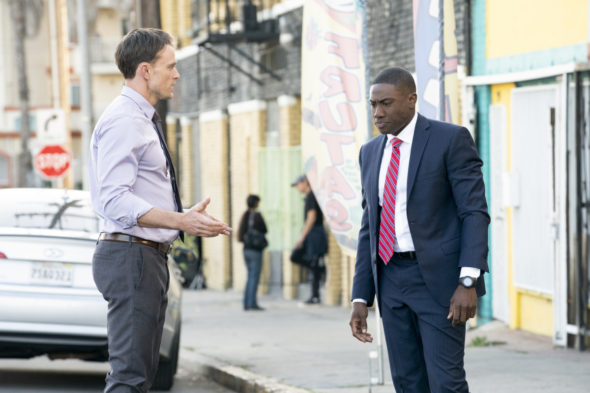 Can Lola maintain order in the second season of the All Rise TV show on CBS? As we all know, the Nielsen ratings typically play a big role in determining whether a TV show like All Rise is cancelled or renewed for season three. Unfortunately, most of us do not live in Nielsen households. Because many viewers feel frustration when their viewing habits and opinions aren’t considered, we invite you to rate all of the second season episodes of All Rise here.  *Status Update Below.

A CBS legal drama series, All Rise stars Simone Missick, Wilson Bethel, Marg Helgenberger, Jessica Camacho, J. Alex Brinson, Lindsay Mendez, Ruthie Ann Miles, Lindsay Gort, and Audrey Corsa. The series follows the chaotic, hopeful (and sometimes absurd) world of those who work at a courthouse in Los Angeles. At the center of this drama series is Lola Carmichael (Missick), a recently appointed judge who was previously a highly regarded and impressive deputy district attorney. She depends on the counsel of people like her Deputy District Attorney Mark Callan (Bethel), Supervisory Judge Lisa Benner (Helgenberger), and pragmatic judicial assistant Sherri Kansky (Miles). Lola pushes the boundaries and challenges the expectations of what a judge can be and receives both support and pushback from those around her.

What do you think? Which season two episodes of the All Rise TV series do you rate as wonderful, terrible, or somewhere between? Do you think that All Rise should be cancelled or renewed for a third season on CBS? Don’t forget to vote, and share your thoughts, below.

Love,love,love this show. The reruns seem to come every other week though, hurt the continuity. I think the acting, writing is superb, please renew for next year!

I’m heavily hoping that this show comes back I’m especially grateful for a show that represents a black woman in a healthy manner and it touches on real life issues in a effective way. 10/10 for me.

I really do love this show. Legal dramas are my favorite. This show has a great cast and depucts very current events.

Every episode gets better,the quality of the writing and the acting is so great. I also learn a lot about the Court system. I hope it gets renewed as I am getting attached to the characters and storylines. You have to pay attention and you can learn something from this show!

Loved this show last year. It was witty and well written, characters just clicked. Much too serious this year given the issues it’s addressing. Too much conflict to be entertaining. Need to go back to what made it great. Do not want it cancelled.

Please don’t cancel I love all the characters. The show isn’t your topical courtroom drama. I bought the first season because it wasn’t on Netflex. I can’t wait for Monday night.

I enjoy All Rise. Has anyone ever thought to bring on Rachel Bilson for a love interest for Wilson Bethel? There chemistry is amazing!

I say yes to Rachel Bilson. She is great and I dont see any chemistry between Mark and this love interest

It seems that new writers are making a good start on creating relevant plots. l feel these first Season 2 episodes are terrific. Characterizations come across better and scenes don’t seem to switch back and forth as fast helping on continuity. My eyes tear up every time l think of Lola’s statements. And Simone’s baby is due next month. How beautiful!

I actually pay for cable to be able to see All Rise. It keeps you glued to your tv to see what will happen from week to week. Puts a good light on the criminal justice system. Shows there are caring dedicated States Attorneys, Public Defenders, Judges and clerical staff that work hard and care about people. Love that show.

I look forward to All Rise every week .The show contains every facet of real life,the legal system,relationships,strength,heartache.Please don’t replace it with a another “Big Brother,etc ignorance!
Thank You cast,writers for keeping reality-entertainment alive.

Throughly enjoy all characters on “All Rise”. The show seems to have multiple stories all intertwined and at the end of the show, all stories show a positive conclusion.

I truly enjoy All Rise and I am that CBS renewal the series for the second season.