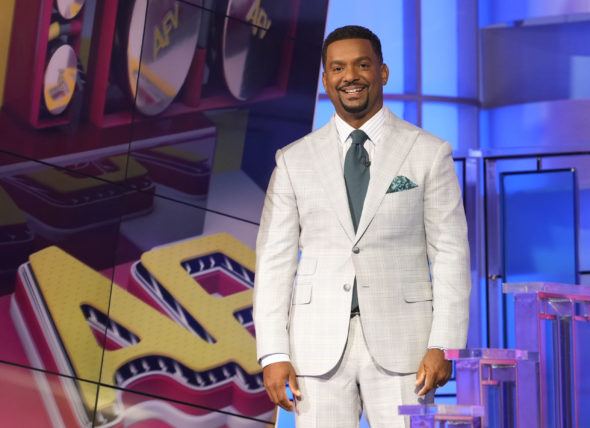 This series has outlasted nearly every other primetime show on network television. Has the America’s Funniest Home Videos TV show been cancelled or renewed for a 34th season on ABC? The television vulture is watching all the latest cancellation and renewal news, so this page is the place to track the status of America’s Funniest Home Videos, season 34. Bookmark it, or subscribe for the latest updates. Remember, the television vulture is watching your shows. Are you?

Airing on the ABC television network, America’s Funniest Home Videos is the alphabet network’s longest-running primetime entertainment show and is currently hosted by Alfonso Ribeiro. For the series, regular people submit comic clips that capture the funny things that happen when people and animals are at their spontaneous best. The studio audience decides which clips they like the best and each week’s first-place winner is awarded $20,000. Those winners then move on to the next competition round where they vie for a $100,000 prize. At the end of the season, the $100,000 prize winners compete for a grand prize vacation package. The show has given away more than $16 million in prize money. Previous show hosts have included Tom Bergeron, D.L. Hughley, and Richard Kind, John Fugelsang and Daisy Fuentes, and the original host, Bob Saget.

The 33rd season of America’s Funniest Home Videos averages a 0.41 rating in the 18-49 demographic and 4.05 million viewers. Compared to season 32, that’s down by 26% in the demo and down by 14% in viewership in the live+same day ratings (includes DVR playback through 3:00 AM). While these numbers don’t include further delayed or streaming viewing, they are a very good indicator of how a show is performing, especially when compared to others on the same channel. There can be other economic factors involved in a show’s fate, but typically the higher-rated series are renewed and the lower-rated ones are cancelled. Find out how America’s Funniest Home Videos stacks up against other ABC TV shows.

Will ABC cancel or renew America’s Funniest Home Videos for season 34? This show seems inexpensive when compared to other shows and draws better ratings than many other ABC series. I’m sure AFV will be renewed. I’ll update this page with breaking developments. Subscribe for free alerts on America’s Funniest Home Videos cancellation or renewal news.

What do you think? Do you hope that the America’s Funniest Home Videos TV show will be renewed for a 34th season? How would you feel if ABC cancelled this TV series, instead?