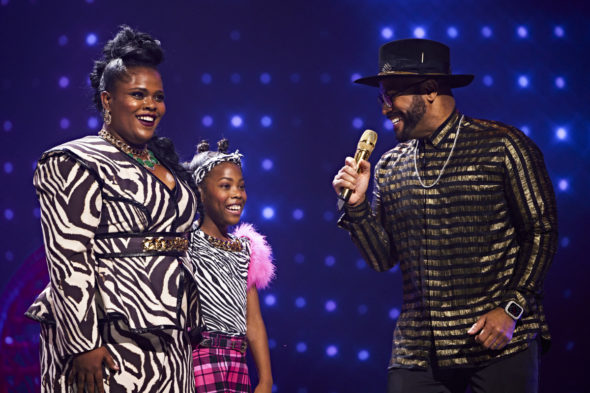 A CBS family competition series, the Come Dance with Me TV show is hosted by Philip Lawrence with judges Jenna Dewan, Tricia Miranda and Dexter Mayfield. In the program, exceptionally talented young dancers from across the country invite one untrained family member (or another adult who has supported their dance dreams) to become their dance partner for a chance to strut their stuff for a grand prize. The pairs are assisted by professional choreographers and learn different styles of dance, from hip hop and ballroom to contemporary and theatrical. They perform for a panel of judges. The two lowest-scoring teams then perform a freestyle dance-off to determine which team is eliminated. At the end of the season, only one team will win the $100,000 grand prize.

Judging sucks, when you barely move and other parents are actually dancing it doesnt make sense.

Maybe there should be a point system for individual performance (kid & parent) then how they dance together, story line and skill level. 2 points each for a total of 10.

Show these to the audience so it doesn’t look like favoritism to a team that doesn’t seem like in the same league but tells a good story.

I really LOVE this show..It ‘s got heart.

Come Dance with me is just a sensational new show. Phillip Lawrence is dynamic in his position as host of the show. The sets are fantastic, and the judges are very energized that brings excitement to the show as well as the talent performing.

Producers of the show should be very proud of the premiere show and look to the future in considering Phillp Lawrence as a talk show host!