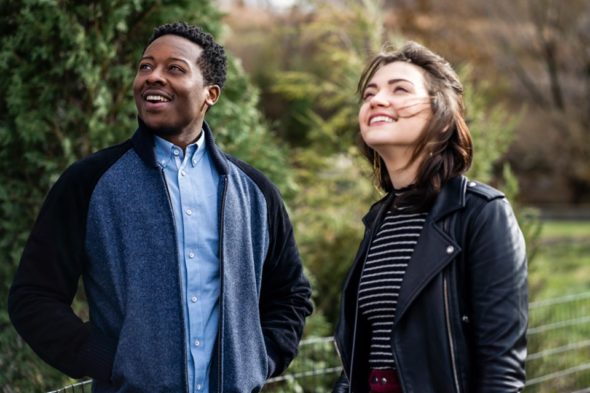 Will Miles uncover the truth in the second season of the God Friended Me TV show on CBS? As we all know, the Nielsen ratings typically play a big role in determining whether a TV show like God Friended Me is cancelled or renewed for season three. Unfortunately, most of us do not live in Nielsen households. Because many viewers feel frustration when their viewing habits and opinions aren’t considered, we invite you to rate all of the second season episodes of God Friended Me here. *Status Update Below.

A CBS comedy-drama God Friended Me stars Brandon Micheal Hall, Violett Beane, Joe Morton, Suraj Sharma, Javicia Leslie, and Erica Gimpel, with Adam Goldberg and Jessica Lu recurring. Set in New York City, the series revolves around a thoughtful and outspoken podcaster named Miles (Hall). Miles is an atheist and that puts him at odds with his father (Morton), a former reverend. Miles’ life is turned upside down when he receives a friend request on social media from a user named “God”. He eventually accepts the request and starts digging into his new friend’s account, convinced it’s a hoax. He partners with journalist Cara Bloom (Beane) and gets additional aide from his sister Ali (Leslie) and his hacker pal, Rakesh (Sharma). Miles is convinced that the “God” account is an elaborate hoax and is devoted to uncovering the truth. In the meantime, he’s playing along and, in the process, seeing his life changed forever.

What do you think? Which season two episodes of the God Friended Me TV series do you rate as wonderful, terrible, or somewhere between? Do you think that God Friended Me on CBS should be cancelled or renewed for a third season? Don’t forget to vote, and share your thoughts, below.

4/15 update: God Friended Me has been cancelled.

It’s a tragedy that a show that is uplifting and deals with real world issues of people dealing with faith would get cancelled. Of course we need more shows that have adults portraying teenagers having sex all the time. I liked the mystery of the search of who was behind the God account. Sure some of the episodes may have been cheesy, but with all the bad stuff going on today, cheesy is the warm comfort food we need.

It is truly sad that this show has been canceled! We love this show and now are wondering if recording it to watch when we could I stead of trying to watch while it was on was a mistake. We read something recently about needing to watch shows while they are on so viewership is more accurately recorded. We are really going to miss this show. It was positive and uplifting and we were looking forward to seeing Miles progression through his doubts.

I want CBS to renew God Friended Me! I wasn’t ready for it to go away never to return! Please bring it back! It was a very well written and acted and should continue!

Why would you cancel such a wonderful show like this, God Friended Me? I am so upset and disappointed. There is so much violence and garbage on tv, why can’t they keep a few decent show on tv, without always ending them. The world needs more shows like this one, and what do they do, they take it off. Shame on you, NBC. I hope someone takes over this show so it can continue.

Please bring God Friended Me back. It is one of the ( if not the) best shows on tv in a long time. The actors are perfect in the roles they play. The story lines are real-life. But most of all there is no violence and it puts God in the lives of everyone watching. Please????

Gid Friended Me great show. How can u cancel. Most shows on tv crap. Good shows u always take off. I love this show everything about it. That’s like another show with vickie larence The Cool Kids. I’m tired of good shows being taken off. I like comedy the best. Not killing, rich people shows who cares.

I can’t believe you are canceling this show. It’s one of the few descent shows on tv. I’m very disappointed. Why are you taking good shows off and putting all them stupid one on? We like show’s without violence and cursing!!! Reconsider!!!!!

I feel like everyone else. I don’t understand why this show was canceled. It was my Sunday night go to.

Don’t cancel God Friended Me!
It’s the best show! It makes sense, is funny, serious, quirky and I love that each week the actors and story line varies !! We need more shows like this instead of more violent shows!

We are so sorry that God Friended Me was cancelled. We don’t agree on watching most shows but looked forward each week to something that we could enjoy together. Please reconsider.

I am sorry that God Friended Me was cancelled. I enjoyed the last season more than ever so I hope someone takes it over and starts the next season.

At this rate I really wonder if it’s wrong to have a good show of humanity verse’s shows of deceit and violence. Our family looked forward every week to this show. I really hope they reconsider a 3rd season.

I can’t believe they have cancelled this show! I love this show and I couldn’t wait each week for it to come on.. So, I guess this means they will replace it with another stupid reality show that anyone with a real brain won’t watch anyway!!! We need more shows like this one! I hope another network or Netflix picks it up!

I read all the comments to date below and I can’t seem to find something to add. I can only agree that this was a mistake to cancel. My wife and I could not wait for Sunday night to watch this feel good show. I will really feel it next Sunday night.

{Please bring back this show. Thoroughly enjoyable. Hope and faith in mankind. Not enough of this and this particular show provided mystery, drama and good values. Shame on you for cancelling.