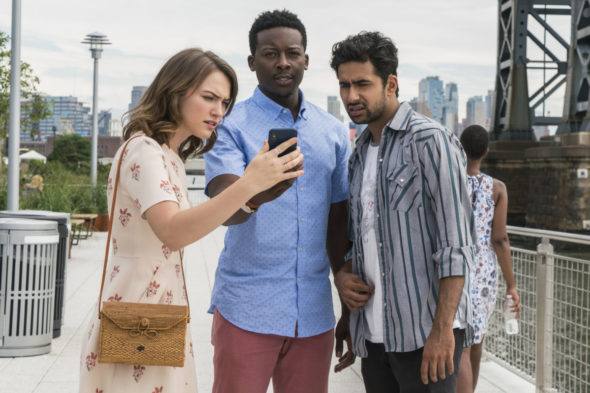 Do viewers have faith in the first season of the God Friended Me TV show on CBS? As we know, the Nielsen ratings typically play a big role in determining whether a TV show like God Friended Me is cancelled or renewed for season two. Unfortunately, most of us do not live in Nielsen households. Because of that, many viewers are frustrated their viewing habits and opinions aren’t considered before a show is cancelled or renewed. So, we invite you to rate all of the season one episodes of God Friended Me below.

A drama series airing on CBS, God Friended Me stars Brandon Micheal Hall, Violett Beane, Suraj Sharma, Javicia Leslie, and Joe Morton. Set in New York City, the series revolves around a thoughtful and outspoken podcaster named Miles(Hall). Miles is an atheist and that puts him at odds with his reverend father (Morton). Miles’ life is turned upside down when he receives a friend request on social media from a user named “God”. He eventually accepts and starts digging into his new friend’s account, convinced it’s a hoax. He partners with journalist Cara Bloom (Beane) and gets additional aide from his sister Ali (Leslie) and his hacker pal Rakesh (Sharma). Miles is convinced that the “God” account is an elaborate hoax and is devoted to uncovering the truth. In the meantime, he’s playing along and, in the process, seeing his life changed forever.

What do you think? Which season one episodes of the God Friended Me TV series do you rate as wonderful, terrible, or somewhere between? Should this CBS show be cancelled or renewed for a second season? Don’t forget to vote, and share your thoughts, below.

Best new show. Love this series. Hope it stays on for a long time.

I love to show. Its the best since The Forgotton.

LOVE LOVE LOVE THE SHOW!!! CAN’T WAIT FOR NEXT SEASON TO COME OUT!!!