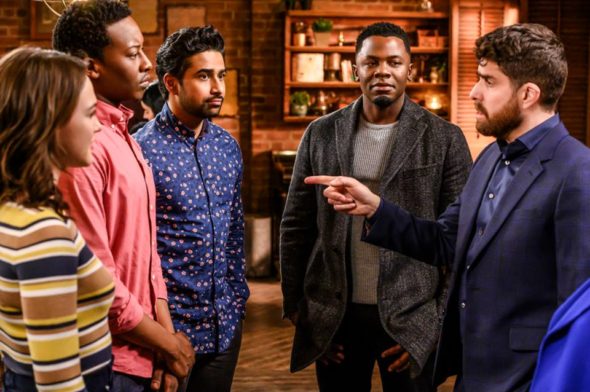 Is this TV series still heavenly? Has the God Friended Me TV show been cancelled or renewed for a third season on CBS? The television vulture is watching all the latest cancellation and renewal news, so this page is the place to track the status of God Friended Me, season three. Bookmark it, or subscribe for the latest updates. Remember, the television vulture is watching your shows. Are you?

Airing on the CBS television network, God Friended Me stars Brandon Micheal Hall, Violett Beane, Joe Morton, Suraj Sharma, Javicia Leslie, and Erica Gimpel, with Adam Goldberg and Jessica Lu recurring. Set in New York City, the series revolves around a thoughtful and outspoken podcaster named Miles (Hall). Miles is an atheist and that puts him at odds with his father (Morton), a former reverend. Miles’ life is turned upside down when he receives a friend request on social media from a user named “God”. He eventually accepts the request and starts digging into his new friend’s account, convinced it’s a hoax. He partners with journalist Cara Bloom (Beane) and gets additional aide from his sister Ali (Leslie) and his hacker pal, Rakesh (Sharma). Miles is convinced that the “God” account is an elaborate hoax and is devoted to uncovering the truth. In the meantime, he’s playing along and, in the process, seeing his life changed forever.

The second season of God Friended Me averaged a 0.64 rating in the 18-49 demographic and 6.20 million viewers. Compared to season one, that’s down by 28% in the demo by down by 20% in viewership. Find out how God Friended Me stacks up against other CBS TV shows.

What do you think? Did you hope the God Friended Me TV show would be renewed for a third season? Are you sorry that CBS cancelled this TV series, instead?

God Friend Me was one of the most uplifting, non-violet shows I have watched for a long time. I really miss it. With all the negativity in the world, it was refuge of peace and relaxation. It’s too bad it had to be cancelled. Someone wasn’t hyping it properly-or maybe you’re looking at the wrong demographic for watching this show. Older people buy your products too and they’re more likely to watch TV as opposed to streaming. If possible, please reconsider!

I really liked this show a lot. I watched it all the time.

We really enjoyed this show. It was so well crafted so that events & people fell into the
right places at the right times. Can’t understand cancellation.

It was one of THE BEST, most uplifting shows on TV. I am sooo disappointed . We need hope in 2020 and that’s exactly what this series gave us..