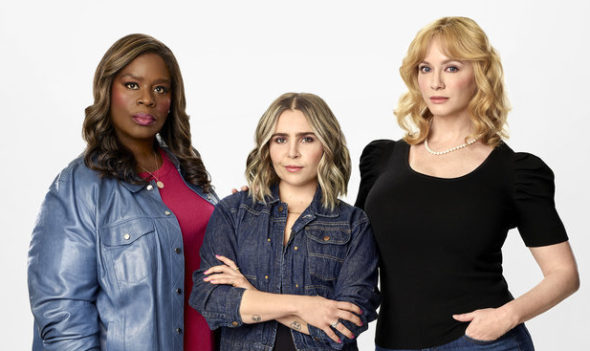 Beth, Ruby, and Annie won’t be back for the 2021-22 season. NBC has cancelled the Good Girls series so there won’t be a fifth year of the low-rated show.

A drama series, Good Girls stars Christina Hendricks, Retta, Mae Whitman, Reno Wilson, Manny Montana, Lidya Jewett, Isaiah Stannard, and Matthew Lillard. The TV series centers on three suburban moms who’ve struggled to get by. They hold up the local Fine & Frugal supermarket, but their take far exceeds their expectations and they find themselves in deep trouble with the local crime boss. In season four, the stakes get higher as the Secret Service closes in on the women’s counterfeit ring. When we last saw Beth, she was struggling to carve out her own criminal path separate from Rio, using her husband’s spa company, Boland Bubbles, as a front. Ruby seemed to have salvaged her marriage after a rocky road, but only time will tell if her hidden secrets implode. Annie is focusing on inner love and healing as she takes the journey to rebuild independence.

Airing on primarily on Sunday nights, the fourth season of Good Girls averages a 0.34 rating in the 18-49 demographic and 1.47 million viewers in the live+same day ratings. Compared to season three, that’s down by 20% in the demo and down by 20% in viewership (including DVR playback through 3:00 AM). While these numbers don’t include further delayed or streaming viewing, they are a very good indicator of how a show is performing, especially when compared to others on the same channel. There can be other economic factors involved in a show’s fate, but typically the higher-rated series are renewed and the lower-rated ones are cancelled.

Season four resumed last night, after a month’s break, with a pair of episodes. There are five installments remaining and a two-hour finale is expected to air on July 22nd.

There had been some discussion about moving Good Girls to a streaming service but it apparently didn’t work financially.

What do you think? Do you enjoy the Good Girls TV show? Are you sorry to hear that this NBC series won’t be back for a fifth season?

PEOPLE OF THE TELEVISION WORLD—AS YOU CAN, SEE WE THE PEOPLE WHO WATCH THE TELEVISION SHOWS WANT YOU TO LISTEN TPO OUR OPINION AND GIVE US A SAY SO—WE LOVE GOOD GIRLS—WE DO NOT WANT IT TO BE CANCELLED–YES SEASON FOUR STARTED OFF WITH A TWO HOUR EPISODE–THAT WAS A GREAT IDEA–LETS DO MORE OF THOSE–BUT WE THE PEOPLE WHO LOVE GOOD GIRLS WILL BE HAPPY WITH OUR ONE HOUR SHOW (LESS COMMERCIALS MORE OF THE EPISODE OF COURSE)—WE WILL GO TO ANOTHER CHANNEL IF PICKED UP BY IT–WE WANT GOOD GIRLS TO CONTINUE–WE WANT GOOD GIRLS TO BE OUR… Read more »

Bummer!
Canceling the Good Girls.
So Disappointed in NBC.

The premise and first several episodes were hilarious! Then it turned dark, then really dark. It shouldn’t really surprise anyone that a ratings drop like that means the show eventually turned off enough viewers permanently to the point it wasn’t worth producing. It would have made an excellent cable show and may have lasted longer.

I am EXTREMELY bummed this show is ending! We absolutely loved Good Girls! Please bring it back!

No, not Good Girls!
Love this show and cast.
Hopefully Netflix will pick it up!

Love this show. The storyline is unique and funny.

I think Good Girls is a great show; I’m sad and disappointed in NBC’s canceling it. It had a great cast, drama, humor and suspense. Unfortunately, I guess it’s just the 18-49 crowd that counts when it comes to ratings. I hope another network will pick them up, I’ll gladly change my channel to watch.

It’s all about network money. I enjoyed Good Girls, looked forward to it each week. It’s a real shame there will not be a season 5.

Good girls is literally my favorite show! I can’t believe it’s cancelled. I’m really disappointed and shocked. I will miss it:(

No, no, no. Good Girls is great tv. Riveting storylines with excellent actresses and actors. Don’t make this mistake. Please renew Good Girls, move it to a different station or try streaming. Don’t lose this show!

I can’t believe they cancelled Good Girls. There are so few good scripted shows to watch and this was a great one. Good story lines and the 3 ladies are wonderful. Always look forward to watching it. NBC is cancelling this but renewed the Black List??
Please some other channel pick up this show. I can’t bear another reality show.

This is an awesome show. It should continue. I hope they change their mind about canceling.

It was unwatchable after season two. So I don’t mind.