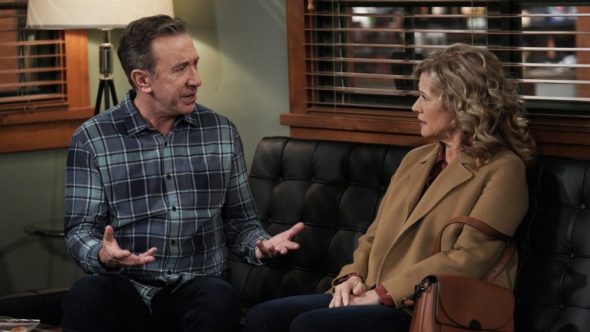 What’s next for Last Man Standing? Recently, star Tim Allen and executive producer Kevin Abbott spoke with TVLine and TVInsider about the future of the FOX TV show.

The sitcom revolves around Mike Baxter (Tim Allen), the marketing director of the Outdoor Man sporting goods stores and a “man’s man”. His family doesn’t see eye-to-eye with him so it can sometimes be a little tough for Mike to stand his ground and stay in touch with his inner man. The cast also includes Nancy Travis, Hector Elizondo, Amanda Fuller, Christoph Sanders, Molly McCook, Jordan Masterson, Jonathan Adams, and Krista Marie Yu.

Last Man Standing just wrapped its eighth season after production was cut short due to the coronavirus pandemic. EP Kevin Abbott told TVInsider they didn’t intend episode 21 to be the finale:

Had I known even what it was going to be like … I believe we would have changed some things in Episode 21 … I said, “Episode 21 can’t be the season finale. We sent Kristin off in labor. You can’t end a season like that.” Of course, you totally can, it’s a great season ending as a cliff hanger. When a show is as late in its run as we are, I’d feel an obligation not to end on a cliff hanger because we might not come back. I don’t want to pose some big issue and then not be able to answer for our devoted fans. So I really wanted to shoot Episode 22 and I held on for as long as I could, but it was obvious that we couldn’t do that, we couldn’t guarantee safety of everybody involved. So we had to shut down.”

And what about a ninth season? FOXhas not yet announced a renewal but Abbott feels “confident” the series will return:

I mean, I think we’re in the situation we were in last year in terms of if it were a normal year. I would feel very confident that we would be back. As confident as you can feel in this general environment. I would say we would be favored to come back, let’s put it that way. And in that instance, I would want to shoot the show that we didn’t get to shoot because it’s a great episode. I can’t imagine that in this changed universe that that exact episode could just be re-shot and put on the air and feel correct, you know what I mean? Hospitals changed drastically. People now have a very different opinion of hospitals than when we shot that episode.”

Lastly, fans may have noticed Boyd’s (Jet Jurgensmeyer) absence during season eight. Abbott told TVLine the actor had another commitment at the time:

Actually, the actor [Jet Jurgensmeyer] had another commitment. He’d asked to do another show, so we had let him out…”

What do you think? Do you watch Last Man Standing? Do you want a ninth season?

Love the show. Please renew. Wish the old Mandy was on it though.

My favorite show! I don’t miss the reruns either!

One of my favorite shows!!!

Last Man Standing is the best!! Renew it!

Renew it best show out there

I hope they renew last man standing… But I wish they would bring back the first Mandy again! It’s just not the same without herShe was my favorite character! I miss her!

LMS IS ONE OF THE BEST AND FUNNIEST SHOWS ON TV!!! ABC were fools to cancel it and FOX were right in picking it up. It is the highlight of my tv viewing week, both new episodes and reruns. Please keep it for next season!!!

We’ve watched all seasons of Last Man Standing and want to see many, many more. There are not many shows on TV that shows a guy like Tim, a real man’s man who always ends up showing his love and support for his wife and family. He always, in his own special way makes them the winners while maintaining his Macho status. I love the show and want to see lots more.