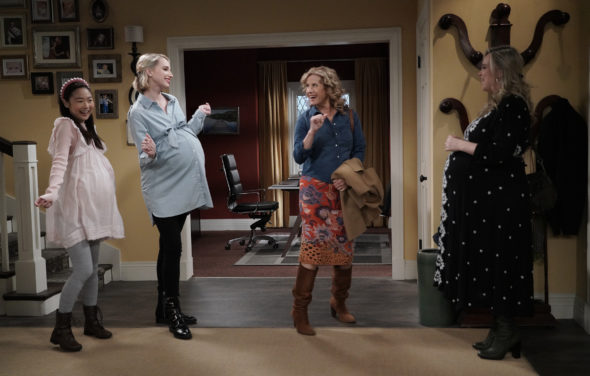 Last Man Standing is getting ready for a big moment, and one of the members of the cast is talking all about it. Amanda Fuller is not only starring on the (now) season eight finale, but she is directing the episode. This is her first time doing so.

Amanda Fuller revealed that ‘the baby is coming’ during the episode. The season has worked up to that moment. However, the episode was not meant to be the season finale. FOX shutdown production on the series the day before the cast was set to film the actual season finale.

Fuller said the following about the shutdown of Last Man Standing by FOX to TV Line:

“No… That last tape night, I don’t think any of us thought it would be our last. There was no talk of that. It wasn’t until Friday, after rehearsing [Episode 22] for a few days, that we were all like, “Um, how are we going to do this?” And that was only three days after our last tape night, so that’s how quickly [things changed]. We made the decision to not do it in front of a live audience on Friday, but it wasn’t until Sunday night that we actually shut down, the night before we were supposed to shoot it. So it all happened really fast. My dressing room is still intact. None of us, as far as I know, were able to go back and empty out our dressing rooms. Fox was like, “Don’t come back on the lot,” and that was it.”

It is not known if the series will be able to film its true season finale at a later date. Last Man Standing has yet to be renewed for a ninth season.

What do you think? Are you a fan of this series? Are you excited for the finale?

Last Man Standing has been a lifeline in a way for my husband since the beginning Was one thing he always looked forward to when fighting his depression He still watches reruns nightly and was so excited when they were picked up by Fox. Sadly no one ever gives a reason for cancelling such a great family show

Amanda, blessings to you and your (real life) baby. Can’t wait to hear you and ‘the gang’ are back to work.

I was in shock when I read that it was the series finale!!! It’s one of the few family shows on tv now that portrays an intact family. Shame on FoxTV, just shame on you!!!