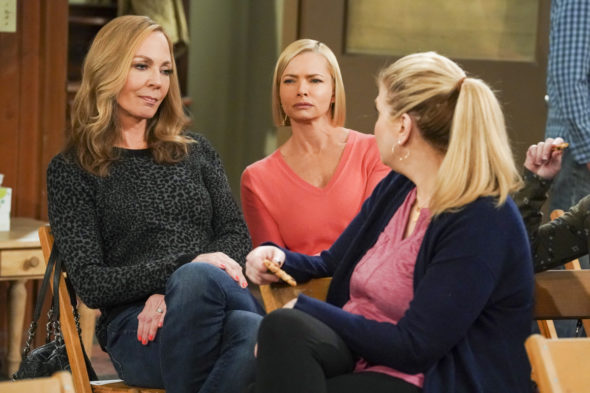 Fans of the Mom TV series are understandably upset that CBS has cancelled the Thursday night sitcom and they aren’t alone. Star Allison Janney (above, left) has expressed her disappointment that there won’t be a ninth season.

The Mom TV series stars Janney, Mimi Kennedy, Jaime Pressly, Beth Hall, William Fichtner, and Kristen Johnston. In season eight, recovering addict Bonnie (Janney) must learn to adjust to life without her daughter and former-roommate, Christy (Anna Faris), around. With a chaotic past behind her and a newly empty nest, Bonnie focuses on her marriage to her husband, Adam (Fichtner), and on what she wants to be now that she’s finally grown up. Now more than ever, Bonnie depends on the support of her friends, including wise Marjorie (Kennedy), wealthy and sometimes misguided Jill (Pressly), overly emotional Wendy (Hall), and her foster sister, Tammy (Johnston), who was recently released from prison. Through it all, these women help each other overcome their mistakes and stay sober in the face of whatever life throws their way.
The eighth season of Mom currently averages a 0.62 rating in the 18-49 demographic and 5.07 million viewers. Compared to season seven, that’s down by 21% in the demo and down by 19% in viewership. Despite the declines, Mom is the second-highest-rated show on CBS’ Thursday night schedule.

In a remote interview with James Corden on The Late Late Show, Janney was clearly upset when asked about the cancellation and said she had been fully expecting Mom to be renewed for a ninth year. “I’m sad. I wish we’d have at least another year, for the writers to have that much time to ramp up to the ending. We sort of found out sooner than we thought we would hear. We had thought, ‘Surely they’re going to want more Mom,’ and they decided not.”

The reason for the show ending is likely financial. “There are so many reasons behind it — most of them probably money. But, I know that [series co-creator] Chuck Lorre is writing the final episode, and we’re right now filming the third-to-last episode.”

How is she preparing for the end? Janney said, “I’m having a lot of moments where I’m just standing on set and taking it in, and looking at all the faces I’ve looked at for eight years, You know, it’s really lovely to be part of a [long-running] show because as an actor you don’t get a chance to do that very often. I’ve been so lucky — seven years on West Wing and eight years on Mom — and I have a real community of people that I love and it’s going to be very hard to just have, all of sudden, it’s gone.”

Janney continued, “And no matter how much I prepare myself for it, I know I’m going to be just in tears, buckets of tears, because it’s just been so incredible. The amazing letters I get from people who are in the program or people who got sober with us. It’s been such a great show to be a part of, and it’s so rare when you do something like that and it affects people in a positive way out in the world. It makes me sad, but onward.”

What do you think? Are you a fan of the Mom TV series? Are you sad that the show’s been cancelled? How would you like to see the series wrap up?

With Anna Faris gone the show has last it’s flavor,sorry just not the same any more!

This is the only sitcom i have loved for a long time. Not surprised at CBS for making the bad decision to cancel it. Im sure they will put a piece of crap in that slot thats not funny. Wont know though , i wont be watching.

Extremely disappointed they’re cancelling this show, have been a faithful watcher from day one. Its touched on alot of my lifes experiences n how getting sober is life long, this show I think is necessary for alot of people in these situations and they make it wonderfully funny on top of it all. Please keep it going for another season at theleast.

One of the best shows on tv. What’s up CBS? First God Friended Me, now Mom, ugh!

I’m so bummed yet another good show they are canceling when it clearly is a well like show.
There’s so much crap and negativity on TV where they keep canceling the positive lighthearted shows

So sad, I loved This show!!

I am so sad this quality show is ending, it was so fun to watch with all the different characters. It had great messaging on how addiction affects family’s and it helped diminish the stigma that alcoholics and family’s face. What a shame that this show is not coming back!!

I loved this show. But it did loose a little something when Kristy left. It would be nice to bring her back in the season finale.

This is a great show that has helped people with addictions and made people laugh. Please renew!

I am so very disappointed that Mom is being cancelled. I wondered what it would be like once her daughter left the show, but I think it’s great and I just don’t understand why they are canceling it!!!
I think it’s awful that it’s going to be over!!!

Why did the actress playing Christie leave? Has she a new project that took priority? A shame — it was inevitible the showe woulde canceled without her. A shame, really. I started watching this mostly because it was a Chuck Lorre production

I loved Christie on the show and wasn’t happy when she left, however I think the show is still really good and am disappointed that it’s being cancelled

I can’t believe you’re cancelling the one truly great show – a show that has had such a positive influence on so many people!! I could go on and on, but it’s such a shame that something so wonderful and helpful is not continuing when there is so much sadness and hardship in the world!!

If you love the way the charaxters seem real & interact so naturally, look up Chuck Lorre’s other shows (wiki has a list); try Big Bang Theory or Two and a Half Men (the latter shows alcoholism for the rich & spoiled, unchecked, until Charlie Sheen wasa booted)

Concerned—We feel just like you, we are absolutely crushed that they are cancelling this show, we enjoy it so much, there are less and less comedies for us to watch and it’s very sad, couldn’t they have least had a ninth year and brought to and end properly if they are determined to cancel this funny show. There is getting to be less and less to watch for comedies anymore. Why can seniours and other people that aren’t teenagers have a chance at voting for our shows too. This is incredibly sad. It’s just not right. PLEASE DON’T CANCEL THIS… Read more »

I agree we need a bigger say on the deacons when canceling a show.
The age group was what 17 to 48?
Why, the older pass 48 would clearly be home more and watching regular not on line. Pass going to school raising young children ect where is our say!!!!?????

Can’t believe Mom is being cancelled! Don’t get me wrong, I love Anna Faris, but have always laughed the hardest at Allison Janney and her lines on the show…and thought she carried it more so than Anna did. Although it started out being about Christy’s character, it has evolved over the years into being about alcoholics and the support they give each other. I love the characters on there now the and the dynamics they bring. Please reconsider CBS, this is a GREAT show! And one of the few where we don’t have to deal with the BS that is… Read more »