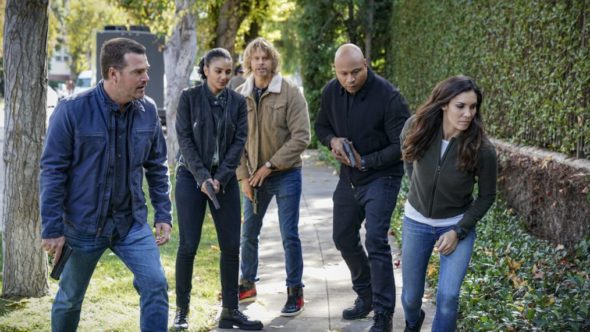 CBS is headed back to the City of Angels. The network just announced they’ve renewed NCIS: Los Angeles for a 12th season.

What do you think? Do you watch NCIS: Los Angeles TV show on CBS? How many more seasons do you think this series will run, beyond season 12?

Really enjoy your show. Would love to be in it

NCIS LA is the best show on TV now. Regular NCIS was great until Dinozzo and Ziva left. Now I can’t wait to watch Sam, Calen, Detiz, and Kendsy!

I am so glad it was renewed. Next to original ncis this is a favorite

Great show! Hope it will be on for at least 10 more years!

Great show. when will it air again. I hope streaming service counts in viewer stats

excellent show. we have never missed it.

I still love this show as long as the characters are not replaced. They all work together so well.

The ncisla is the best of all noise shows.

ALL the NCIS shows are SUPER AWESOME!!! I don’t know what can ever replace them. Mark Hammon started GREAT TV shows! Keep them coming!!

I absolutely love this show the chemistry among all the actors is amazing!! Love love love it❤️

All character are so cute and like to see them continue, action is fun especially when 4 of them in the same scene. Arkedy is also cute. And bring back Hetty + Anna she is sexy and genuine person.

I love this show. Never Ever cancel it. Best show on TV! Love All the cast including Hetty at the helm!!!

I love this show. I can’t wait til it comes on on Sunday. Please don’t change it. I love all the characters especially Hatti. But Linda Hunt might be getting tired, if so let her know her fans live her.

Love this show, with the SAME characters, don’t change anything!