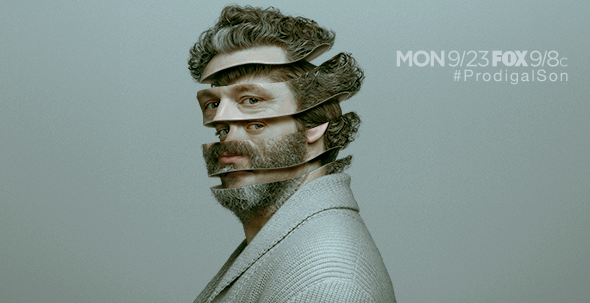 Last season, FOX cancelled all of its new scripted series so that none survived to see a second season. Now, the network has introduced a different kind of drama called Prodigal Son. Will it catch on where others didn’t? Will Prodigal Son be cancelled or renewed for season two? Stay tuned. *Status update below.

A crime drama series, the Prodigal Son TV series stars Tom Payne, Michael Sheen, Bellamy Young, Lou Diamond Phillips, Aurora Perrineau, Frank Harts, Halston Sage, and Keiko Agena. Malcolm Bright (Payne) is an extraordinary criminal psychologist who knows how killers think and how their minds work. In the 1990s, his father, Dr. Martin Whitly (Sheen), was a notorious serial killer called “The Surgeon” who killed at least 23 people. Since murder is “the family business”, Malcolm uses his twisted genius for good, to help the NYPD solve crimes and stop killers. He works alongside his longtime mentor, Gil Arroyo (Phillips), and two detectives — no-nonsense Dani Powell (Perrineau) and JT Tarmel (Harts), a born-and-bred New Yorker who questions whether Bright is a psychopath himself.

What do you think? Do you like the Prodigal Son TV series on FOX? Should it be cancelled or renewed for a second season?

Love this show humerous,suspenceful, clever and creative. I cried when “House” and ” Bones” retired. Now I have a show to look forward to every Monday night!

For a person who never watches TV; boy did this grasp my attention. Please do not cancel this show. LOVE IT’S full of suspense series!

I think this is a great show. Different from what’s out there now. Keeps you in suspence

Give Prodigal Son another season. Let actors get comfortable with their characters. The stiffness….izs very visible…making the characters come across cartoonish….this can ‘ve a GOOD show…make it flow more human.

My favorite show! Love the characters and the excellent acting. Full of suspense and mystery. Keeps me guessing and on the edge of my seat!

Absolutely love it!!! It’s like watching The silence of the lambs in each episode. Don’t cancel it!!!!

I love the show, the of the best new series out there! Give it a chance to be catch on!!

I love the show! I really hope they keep it!