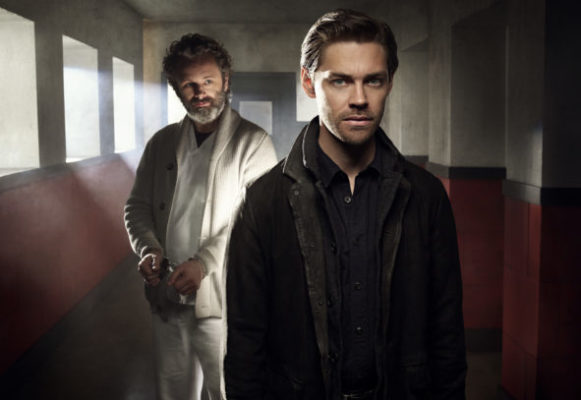 Is it a crime to stop watching the first season of the Prodigal Son TV show on FOX? As we all know, the Nielsen ratings typically play a big role in determining whether a TV show like Prodigal Son is cancelled or renewed for season two. Unfortunately, most of us do not live in Nielsen households. Because many viewers feel frustration when their viewing habits and opinions aren’t considered, we’d like to offer you the chance to rate all of the season one episodes of Prodigal Son here. *Status update below.

A FOX crime drama series, the Prodigal Son TV series stars Tom Payne, Michael Sheen, Bellamy Young, Lou Diamond Phillips, Aurora Perrineau, Frank Harts, Halston Sage, and Keiko Agena. Malcolm Bright (Payne) is an extraordinary criminal psychologist who knows how killers think and how their minds work. In the 1990s, his father, Dr. Martin Whitly (Sheen), was a notorious serial killer called “The Surgeon” who killed at least 23 people. Since murder is “the family business”, Malcolm uses his twisted genius for good, to help the NYPD solve crimes and stop killers. He works alongside his longtime mentor, Gil Arroyo (Phillips), and two detectives — no-nonsense Dani Powell (Perrineau) and JT Tarmel (Harts), a born-and-bred New Yorker who questions whether Bright is a psychopath himself.

What do you think? Which season one episodes of the Prodigal Son TV series do you rate as wonderful, terrible, or somewhere between? Should FOX cancel or renew Prodigal Son for a second season? Don’t forget to vote, and share your thoughts, below.

Last episode. Kinda saw it coming but was actually shocked when it happened!!

This is my favorite show. There is nothing I don’t love about it. Fingers crossed a second season is coming.

I love this series and would really like to see a second season!

THIS SHOW HAS TO BE RENEWED! BEST SERIES on TV in a very long time!

Please don’t cancel my show!. I look forward to every Monday evening to watch my boy Malcolm Bright!!!

I think this show has it all suspense,romance, fear factor, really all of the ingredients for a wonderfully entertaining great time. I hope they renew for more seasons. This is literally the best show on tv. It would be a shame to cancel this show with all that talent in the show. I LOVE IT!!

This is a great show, and I always look forward to watching it. The acting is phenomenal and the story lines are fantastic. DO NOT CANCEL!

I love Prodical Son! A amazing show & cast! Please have this show return! One of the best shows yet!

I’m very anxious to know what happens after Ainsley stabs a andicott! Please I am begging you RENEW PRODIGAL SON FOR SEASON 2

Watched every episode…. Please renew this show, it is thrilling

This is one of the best new shows on TV! It’s absolutely one of the most intense psychological thrillers I’ve ever seen on television. But it’s also so much fun! The whole season was a trip. The finale left my finance and I staring at each other open-mouthed, like “Wow!” The dynamic between the team and Malcolm and then between his family/ and his father are just so entertaining to watch! I hope this show is on for a very long time.

I want more!!! I couldn’t wait for each new episode best show on tv. This cast is so in sync and dynamic could not be more perfect. Please give us more !!!!