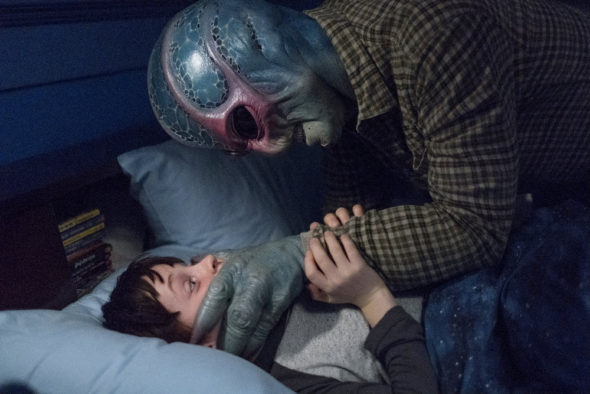 Will Harry abandon his mission in the first season of the Resident Alien TV show on Syfy? As we all know, the Nielsen ratings typically play a big role in determining whether a TV show like Resident Alien is cancelled or renewed for season two. Unfortunately, most of us do not live in Nielsen households. Because many viewers feel frustrated when their viewing habits and opinions aren’t considered, we invite you to rate all of the first season episodes of Resident Alien here. *Status Update Below.

A Syfy comedy series, the Resident Alien TV show is based on the Dark Horse comic series and stars Alan Tudyk, Sara Tomko, Corey Reynolds, Alice Wetterlund, and Levi Fiehler. Recurring cast members include Linda Hamilton, Meredith Garretson, Elizabeth Bowen, Mandell Maughan, Alex Barima, Jenna Lamia, and Judah Prehn. The story revolves around Captain Hah Re (Tudyk), an alien with the secret mission to kill all humans. He crashes on Earth and passes himself off as a human doctor named Dr. Harry Vanderspeigle in a small town in Colorado. In his new guise, Harry starts off living a simple life but things get complicated when he’s roped into solving a local murder and realizes he needs to assimilate into his new world.

What do you think? Which season one episodes of the Resident Alien TV series do you rate as wonderful, terrible, or somewhere between? Do you think that Resident Alien should be cancelled or renewed for a second season on Syfy? Don’t forget to vote, and share your thoughts, below.

Tremendous first season, although the finale felt rushed and incomplete. A minor issue since it has been renewed but it would have been totally unacceptable if that was the end of the whole thing since none of the storyline was resolved or even progressed in this s episode.

This is my new favorite series…but I have to say I don’t like that it’s only on one night per week. Plus, why so long before season 2..????
What a waste of time, having to wait for the next season. Totally different and entertaining..thanks.

RA is an absolute JOY! It has brought back the fun of The X-Files for us. On the flip side, it is causing us multiple injuries – from FOTFLOAO @ some of the totally unexpected twists & “Harry’s” thought processes.

So glad got renewed another season. Look forward every episode interesting show love it.

Resident Alien is the best syfy show in years, and I hope the powers to be have the sense to make a second and third series of the show, and the acting is fantastic especially Alan Tukyd

Love-Love-Love this show! It’s one of the very few shows that my husband and I agree on together! The actors are so good and diverse, hope this stays around please!

The writing is outstanding and the acting is really good. I love the storyline and how things come together. The relationship between Harry and the boy who sees him is just great. Please continue this very entertaining and hilariously funny show. There are so so many possibilities.

There has not been a single episode that I didn’t like. I think it’s a GREAT show! It’s got a great plot, wonderful characters that have several layers to them, laughs, some serious parts, and I can’t wait to watch the next episodes!!! I already feel like this show is family! PLEASE renew this program, we need things like this to watch in today’s times.

This is the show I wanted to hate…. but I absolutely LOVE it. We look forward to each episode to see what prickly Harry finds himself in….. whether it be simply trying to assimilate into earthly society or discovering human emotions with curiosity and blundering.
We located this channel because of this show and are now hooked on finding others to get invested in

my husband and I love love
love this show.. brilliant

Resident alien is the best comedy/drama I have seen in decades!!! All the actors are great!! Again the best!!! Please keep the comedy in the show and NEVER cancel this show!!