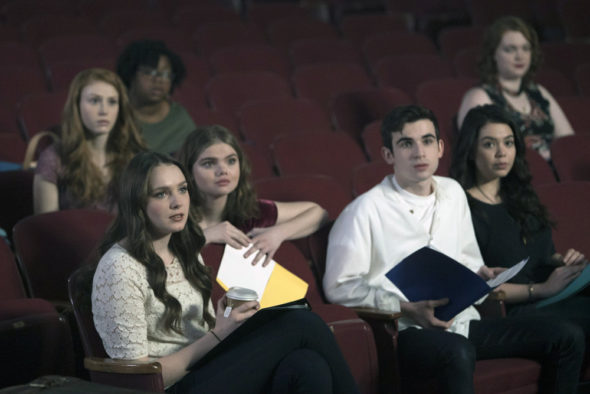 Will Lou Mazzuchelli continue to rise to the occasion? Has the Rise TV show been cancelled or renewed for a second season on NBC? The television vulture is watching all the latest cancellation and renewal news, so this page is the place to track the status of Rise, season two. Bookmark it, or subscribe for the latest updates. Remember, the television vulture is watching your shows. Are you?

The first season of Rise averaged a 0.83 rating in the 18-49 demographic and 4.41 million viewers. Find out how Rise stacks up against other NBC TV shows.

Will NBC cancel or renew Rise for season two? The ratings have been pretty poor so a renewal seems like a longshot. However, the series has generated some positive buzz so, that might just be enough to get it a second season. I’ll keep a hungry on the ratings and update this page with breaking developments. Subscribe for Rise cancellation or renewal alerts.

What do you think? Were you hoping that Rise wasn’t renewed for season two? Are you sorry that NBC cancelled this TV show?

Very disappointed to learn Rise was cancelled. It’s a shame that reality and game shows have taken over. The series offered so much…great actors and interesting story lines. If someone was smart, they’d pick this show up!!!

I am so disappointed that Rise may not be renewed. The show is much more than a musical; it deals with the reality of issues facing today’s school, students, teachers, and parents. The show tackles the pressures of keeping the Arts alive in underfunded schools, sexual identity, the political pressure put on by religious groups, foster care, bi-racial and bi-cultural relationships, and substance abuse. So many stories being told at the same time — a modern “To Kills a Mockingbird.”

Sorry to see that Rise was cancelled….it reflects everyday issues that we all face in the real world as adults and children. Our children need to know just because something may not be politically correct doesn’t mean they have to give in..this show reflects this. Hope the network changes it’s mind.

Rise is one of the best shows we’ve ever watched. We watched every show a second time On Demand because we liked it so much. We’ve NEVER done that before. NBC should promote it and show it in summer reruns before they end it. VERY DISAPPOINTED in NBC. Give it a chance!!!!

I truly enjoyed watching this show as a former teacher who took part in several plays or musicals during my school years.I loved that this show chose to use a variety of topics that young students happen to be aware of or indulge in. There are a number of poor shows that are still being shown. Why “RISE” was cancelled is beyond me. Hope there is a chance of it being renewed.

FINALLY a show with real substance & one that people of all diversities can relate too & yet they are taking it off of the air??? Unreal!!
Grow some balls NBC and just like Lou did…. Just say “Screw it & let the show go on!!!” Be proud of your creation & to hell with all of the uptight viewers!!

Rice is one of those rare shows that clearly, and in an entertaining fashion, show the influence that teachers can have on our younger generation.

Rise is an exciting drama showing the power that dedicated teachers have on students in tough situations.

Finally they cancel a show that needs to be cancelled!

This show is fantastic in so many ways…It’s a show for those of us who want more than the same old stuff. It will be even more popular next year as people learn about it.

Please do not cancel this show!!! My family and i watched every week and could not waiting til the next episode!!!!

Please continue this show. I looked forward to watching it every week. I searched to see when the second season would start and found that it has been cancelled. Every episode made me cry. Please bring it back…please!!

I am so upset I am a 39 year old women that enjoyed the show so much it had so many stories to relate to I think this show showed so much for the young generation!!! I am so sad and disappointed it won’t go on really upsetting