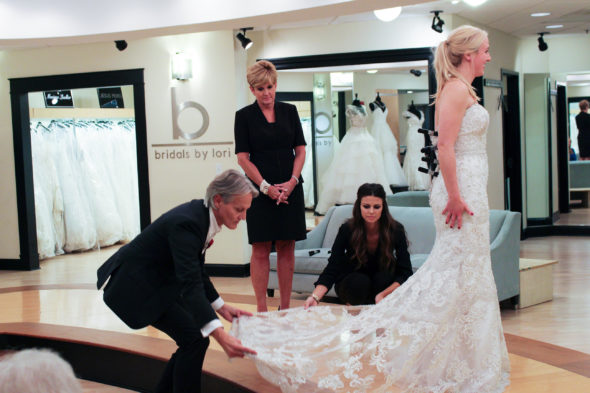 TLC is headed back to the South. Recently, the network announced season 10 of Say Yes to the Dress: Atlanta will premiere in June.

Following the season premiere of Say Yes to the Dress: Atlanta will be the debut of TLC’s new wedding series I Want THAT Wedding, which follows newly engaged couples as they visit “three different weddings: one that is equivalent to what the bride wants to spend, one at the groom’s price point and one in-between. The twist, however, is that the couple won’t know the cost of these weddings until the end of the experiment – and viewers will play along at home as they try to guess what things cost and which wedding most inspired each couple.”

Season 10 of Say Yes to the Dress: Atlanta premieres on TLC on June 9th at 8 p.m. ET/PT, followed by the launch of I Want THAT Wedding at 9 p.m. ET/PT.

(New York, NY) – Lori Allen and Monte Durham are back to “jack up” more brides in the tenth season of TLC’s SAY YES TO THE DRESS: ATLANTA, returning Saturday, June 9 at 8/7c, followed by freshman series I WANT THAT WEDDING, premiering at 9/8c, which invites viewers inside the wedding planning process.

The new season of SAY YES TO THE DRESS: ATLANTA takes fans back inside Bridals by Lori, the premier bridal salon of the South, where business is booming like never before! The endearingly outrageous wedding duo, Lori and Monte, continues to make brides’ dreams come true, while also infusing every visit with their signature charm. From a groom who donates his kidney to his fiancée, to a navy veteran who is dealing with the effects of PTSD, Lori and Monte go to extreme lengths to ensure that every bride-to-be has a unique and unforgettable shopping experience.

Celebrity guests this season include THE BACHELOR’S Britt Nilsson, LADY ANTEBELLUM’S Hillary Scott and the fiancée of Apollo Nida, the ex-husband of REAL HOUSEWIVES OF ATLANTA’s Phaedra Parks. Viewers will also see Lori and Monte head to the Big Apple for Bridal Fashion Week, and Lori’s daughter, Mollie, will return to the shop for a few weeks … but this time, she’s taking charge!

In the season 10 premiere, newbie consultant Becca takes on her first bridal appointment after only two weeks in training! It’s no easy task, especially since the bride, Lindsey, is getting married in three months. Not only must Becca find Lindsey a dress she can get in time, but she also has to please Lindsey’s outspoken mom and family, who don’t seem to agree on anything. Kisha, the second bride featured in the episode, is in search of a dreamy dress for her upcoming fantasy beach wedding. Overwhelmed by a troubled past, a future husband who is a former NBA player, and more drama than one girl can handle, Kisha is more than ready for her happily ever after.

Although finding a dream dress can be stressful, it is only one of many things on a bride’s to-do list. When it comes to wedding planning, deciding on a budget is nerve-racking, and engaged couples don’t always see eye to eye when it comes to how much – or how little – to spend on their nuptials. Every couple goes through it and now there is a perfect way to hash out an ideal budget for the big day. In TLC’s brand-new series I WANT THAT WEDDING, premiering Saturday, June 9 at 9/8c, experienced wedding planners take their newly engaged clients to three different weddings: one that is equivalent to what the bride wants to spend, one at the groom’s price point and one in-between. The twist, however, is that the couple won’t know the cost of these weddings until the end of the experiment – and viewers will play along at home as they try to guess what things cost and which wedding most inspired each couple. When it’s all said and done, the couples will agree on a budget and finally be able to declare I WANT THAT WEDDING!

Join the conversation on social media by using the hashtag #SYTTD and #THATWedding, and ‘Like’ TLC and Say Yes to the Dress on Facebook. Catch up on past seasons of Say Yes to the Dress: Atlanta by downloading the TLC Go app or visiting TLC.com/SayYesAtlanta.

SAY YES TO THE DRESS: ATLANTA is produced by North South Productions for TLC.

I WANT THAT WEDDING is produced by Pie Town Productions for TLC.”

What do you think? Are you a fan of Say Yes to the Dress: Atlanta? Will you watch I Want THAT Wedding?

Loved I want THAT Wedding. Especially, now that my daughter is engaged. Watching old episodes On Demand. Was the show canceled?

When is the episode with Hillary Scott?

Love say yes to the dress Atlanta is the BEST!!

Soooo happy that Say yes to the dress, Atlanta is coming back with new season; it’s my favorite